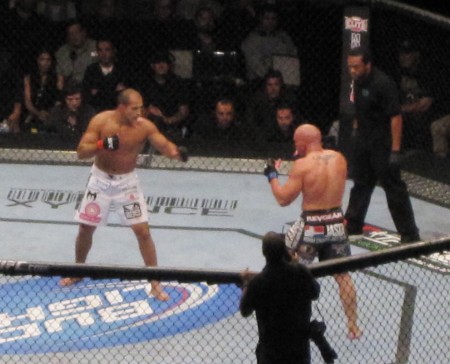 Commenting on another event in the venue's increasingly diverse program, Etihad Stadium Chief Executive Paul Sergeant explained that he was confident the fight would be a sell-out, saying "around 56,000 fans occupied every seat and standing space for a game of international rugby in 2013 and we're anticipating a similar crowd."

He said the event would be economically beneficial for Melbourne and that the UFC would ensure it was a safe experience.

It will be the first time an Ultimate Fighting Championship event will be held in Victoria, after the current Victorian Government lifted a ban on 'octagon'/cage enclosure fights earlier this year.

The previous government had maintained a ban on cage-fighting after the Australian Medical Association and police criticised the use of the octagon.

In 2014, then Victorian Police Chief Commissioner Ken Lay was reported as saying the sport could lead to more violence in the community.

Rod Laver Arena was also considered a possible venue for the event, but organisers are confident of filling the larger venue.

In other news from Etihad Stadium, two AFL fans involved in a fight at the venue on Sunday (16th August) will not be welcome back.

The two young men exchanged blows in the stands during the last quarter of the Western Bulldogs-Melbourne clash before stadium security intervened.

Etihad Stadium spokesman Bill Lane told AFL.com.au "the behaviour of the two men was intolerable and we don't want them back in the stadium."

Victoria Police spoke to the men, who were ejected from the stadium, but confirmed no charges have been laid.

The pair was seated in the premium Medallion Club area, in the third row on level two, below radio broadcast boxes.

Lane said venue officials reacted as quickly as they could, adding "our customer service and security team were on the scene within about a minute.

"We concede that some blows did land in that time, the men were removed from the seating bowl and handed to police.

"They sustained some superficial injuries.

"Police interviewed them both, and ultimately what resulted was up to police."

Etihad Stadium officials are now in talks with the AFL about measures to keep the men from returning to the venue.