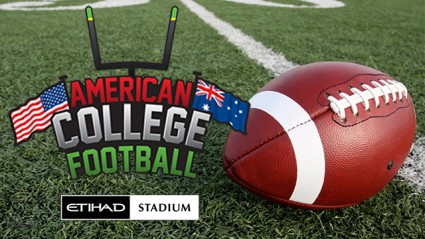 Etihad Stadium can confirm it is negotiating to host a genuine US College Football Bowl game in Melbourne late next year.

Etihad Stadium Chief Executive Paul Sergeant and members of his executive have met with senior officials and partners twice in the USA since the start of the year in an endeavour to secure the very first College Football Bowl in Australia.

Conversations have been on-going involving representatives of the Pac-12 and Mountain West Conferences and according to Sergeant “we are hopeful that within a couple of months, we may be in a position to make a formal announcement, which would be tremendously exciting.”

While Etihad Stadium management is unable to be specific about a time for the event due to all the on-going logistics which need to be worked through, it believes the first game will take place during the Bowl season between mid-December 2016 and mid-January 2017.

Sergeant said widespread research was available to demonstrate that an authentic bowl game would generate massive interest in Melbourne.

He explained “we know that due to cable television interest in US sport has grown massively over a number of years, although at the same time all over the globe, there has been a long time fascination with American football.

“We have little doubt demand will outstrip supply and that we would sell every seat of our stadium (capacity 53,500). It will attract tremendous interest locally as well as across Australia and you can see the opportunity for tourists to visit Melbourne for the occasion,” he said.

Sergeant said his management team was aware that it would involve enormous logistics in bringing College Football and an entourage of up to 800 people to Melbourne, explaining “we’re actually talking about two teams with players and support staff, including cheer leaders and a band. It’s a lot of passports, hotel rooms and meals but we understand that.

“Just in the immediate hours following our preliminary announcement, we are aware that there has been an overwhelming amount of interest and positive feedback.

“It has definitely taken off - there is no doubt about that, and in order to accommodate the huge interest in tickets we have taken the rare step of opening up a wait list through My Ticketmaster where people can register their interest.

“We all know there are plenty of business synergies between Australia and the US. There is a very big US community in Melbourne and other parts of Australia, and we are confident that this is likely to create something very special for both Melbourne and Australia.

“Our vision is that this involves more than just the game day. We can envisage working with our local businesses and creating some sort of festival experience on or around the Docklands water front for the week leading up to the event.”

If the event occurs, it will be only the third bowl game outside the US since 2007. The International Bowl was in Toronto from 2007 to 2010 and the Bahamas Bowl debuted last year.

Etihad Stadium hopes in may be a position to make a further announcement on the event either in late July or shortly afterwards.