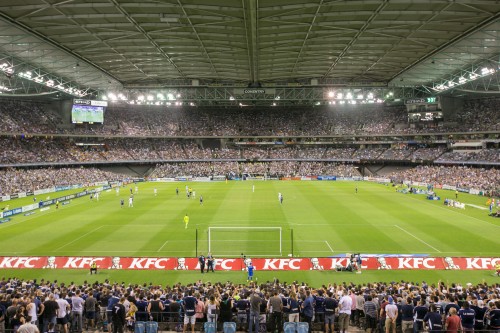 Since Victory attracted a record 55,436 fans to its 6-0 Grand Final demolition of Adelaide in 2007, the club has gone from strength to strength, often showcasing its talents to the nation before capacity crowds at the venue.

Six years later, in 2014/15 Victory played six games at Etihad Stadium during the Hyundai A-League season, averaging 35,612 fans per game with a season-high attendance of 50,873 for the Melbourne Derby Semi Final.

In making the announcement at the club's recent Victory in Business Luncheon Di Pietro thanked Etihad Stadium management for their ongoing support.

Di Pietro stated "I'd like to sincerely thank the Stadium’s Board of Directors and particularly its Chief Executive Paul Sergeant, who has played an integral role in our relationship and throughout these negotiations.

"Paul and his team have been at the forefront of positive change at the stadium, including bringing the stands in to rectangular mode for football matches, upgrading stadium technology for our young audience with Wi-Fi innovation and introducing LED and IPTV screens."

"The stadium is critical to our long-term growth. We have had a 50% increase in membership and attendances over the past four seasons, in turn stretching our capacity at AAMI Park.

"Melbourne’s other A-League venue AAMI Park remains extremely important to Victory as well, and to have both stadiums locked in to long-term arrangements provides us with the opportunity to maximise our fan experience and atmosphere at every home game."

Etihad Stadium Chief Executive Sergeant welcomed the contract extension with Melbourne Victory, adding “Melbourne Victory has become one of the great success stories of Australian domestic team sport and we're honoured to continue its long-term arrangement as a partner club at Etihad Stadium.

“The cross town derby featuring Victory and City has grown into one of the most atmospheric and exciting sporting events in Australia and we’re privileged to host one or two matches a season invariably in front of sell-out crowds.

“With a combination of an excellent playing surface, our retractable roof, a regular capacity to bring the stands closer to the action, we feel we can take some of the credit for producing a fantastic atmosphere for both their highly skilled group of players and their extremely loyal band of supporters.

"Over a period of a decade Victory has shown the way both on and off the field and Etihad Stadium's been honoured to help showcase the club’s finest moments in front of one of the most enthusiastic group of fans that you'll find anywhere in the world."