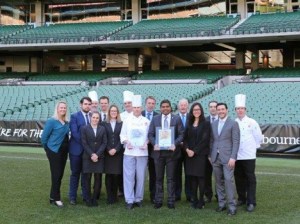 EPICURE has won two industry awards for its catering services at the Melbourne Cricket Ground (MCG).

The catering and event specialist’s MCG team was named winner in the ‘Venue Caterer’ category, before going on to win the major award of ‘Caterer of the Year’ at recent the 2016 Victoria and Tasmania Savour Australia Restaurant & Catering Hostplus Awards for Excellence.

More than 550 hospitality businesses competed and were judged across 32 categories in the nationally-recognised awards.

EPICURE was recognised for its service during a black tie dinner in the Members Dining Room at the MCG.

“Running a hospitality business isn’t easy - there’s a lot of blood sweat and tears that goes into to making it work but when you get the right mix of staff, produce and service, the results can be extraordinary.”