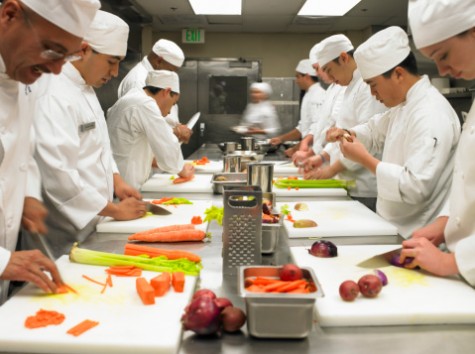 Australia has reaffirmed its global sustainability leadership in the business events space with the Gold Coast Convention and Exhibition Centre (GCCEC) and Adelaide Convention Centre (ACC) becoming the first venues in the world to achieve the coveted EarthCheck Platinum Certification.

EarthCheck’s Platinum Certification recognises 10 consecutive years of best practice in sustainability. Both ACC and GCCEC have demonstrated strong leadership and innovation, consistently performing at above best practice in several key areas of social and environmental actions.

EarthCheck founder and Chief Executive Stewart Moore noted that achieving EarthCheck Certification is no easy feat as it requires total dedication from the entire team to achieve improved results each year.

Moore stated “I congratulate the teams at the Adelaide Convention Centre and the Gold Coast Convention and Exhibition Centre on their outstanding achievements in attaining EarthCheck Platinum Certification. To achieve this high level of certification not only speaks to their individual and enduring commitment to sustainable practices, but also highlights Australia’s sustainability leadership on the global stage.

“As Australia’s leading convention centres, they have consistently demonstrated a commitment to adopt responsible environmental practices, improve operational efficiencies and inspire a number of initiatives in their communities. Both Gold Coast and Adelaide Convention Centres ‘walk the talk’ when it comes to sustainability and they continue to play a vital role in conservation and community initiatives.”

Fighting the War on Waste
Food rescue and recycling is a major focus at the Adelaide Convention Centre. Since mid-2007, the venue has virtually eliminated organic waste to landfill via a comprehensive food redistribution program. To date, the ACC has provided more than 160,000 unused meals to OzHarvest and Foodbank. The ACC’s efforts in this area not only help feed the hungry, but also divert food waste from landfill, helping to save greenhouse gas emissions and water usage. Over the past decade, the ACC’s greenhouse gas emission savings have been equivalent to taking 913 cars off the road, while the venue has saved more than 15 million litres of water, enough water to fill six Olympic sized swimming pools. When it comes to processing organic waste, the ACC also has its own worm farm (launched in 2009), which serves perfectly for composting gardens surrounding the Centre along with supporting local community garden schemes.

Among other initiatives, the ACC has been actively fighting the war on plastic for more than five years, using fully biodegradable and compostable cups and lids for hot and cold beverages, with dedicated ‘bio-bins’ in place across its property to ensure their responsible disposal and keep out of landfill. More recently, the ACC joined other venues across Australia to become plastic straw free. The ACC also enforces a strict ‘local’ food policy, with 97% of produce used sourced from local, sustainable environments. This commitment not only provides visiting delegates with a ‘taste of South Australia’ and helps support local business, but reduces the food miles of the Centre. 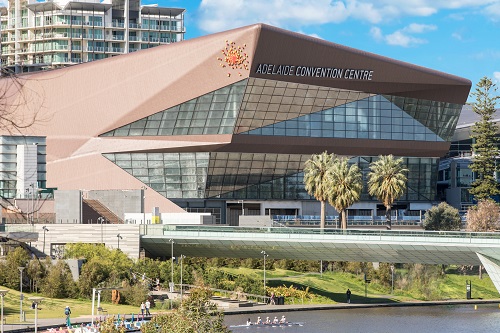 Simon Burgess, General Manager of the Adelaide Convention Centre comments “South Australia is widely respected as an innovative, clean, green destination, which is a natural fit with EarthCheck’s positive and proactive approach to sustainability.

“Over the years we’ve been fortunate to play host to a number of key environmental events and have received lots of attention for our sustainability initiatives, from our worm farm to tree-planting and sustainable buildings and construction. It’s particularly thrilling to achieve EarthCheck Platinum Certification at a time when sustainability and the ‘war on waste’ is such a topical conversation.

“Together with the GCCEC, we’re proud to lead the way when it comes to sustainability in the business events industry, and to do our part in actively promoting environmental awareness and sustainability to not only delegates visiting our venues, but the wider community”.

Tackling the Challenge of Reducing Emissions
The GCCEC has tackled the challenge of creating an environmentally sustainable business model with a robust energy-saving program. At the core is a Building Management System that reduces energy consumption by up to 50% in off-peak periods. Other initiatives include the replacement of more than 350 high bay lights with LED lights and as a result, GCCEC’s focus on energy has resulted in emission savings equivalent to taking 515 cars off the road. 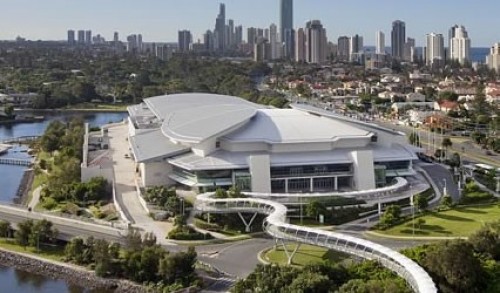 The GCCEC is also passionate about minimising food waste and works closely with OzHarvest, the national food rescue organisation. Since 2014, more than 4,800kg of food has actively been donated to needy members of the Gold Coast community. Additionally, the GCCEC works with food suppliers to change the packaging of goods to more sustainably friendly or recyclable options. These initiatives, among many others, have saved enough waste going to landfill to fill 76 shipping containers or 21,030 wheelie bins over 10 years.

Adrienne Readings, General Manager and Chief Executive of the Gold Coast Convention and Exhibition Centre, adds “we are thrilled to have earned Platinum Certification from EarthCheck.

“At GCCEC we work extremely hard on our waste, water and energy-saving initiatives to reduce our impact on the environment and give back to the community. We believe that sustainability is something that should be a natural part of our daily actions because what we do today will benefit the delegate of tomorrow. It’s an honour to be recognised by the world’s leading scientific benchmarking, certification and advisory group for travel and tourism. Congratulations to the Adelaide Convention Centre on reaching this milestone with us.”

About EarthCheck
Since 1987, EarthCheck has helped businesses, communities and governments to coordinate a more strategic approach to sustainable tourism and destination management by delivering clean, safe, prosperous and healthy destinations for travellers to visit, live, work and play. Most importantly everything that EarthCheck undertakes is underpinned by evidence based scientific data and performance based metrics.