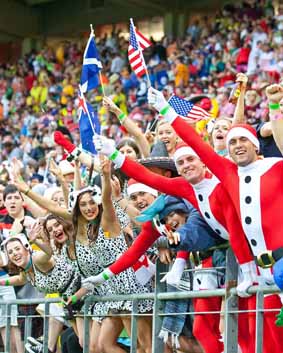 In a bid to reverse its decline in crowds over recent years, organisers of the upcoming 2017 HSBC Wellington Sevens have announced that some of New Zealand’s favourite music acts will be providing entertainment at the upcoming two-day event.

Performers for the 28th and 29th January event at Wellington’s Westpac Stadium include Nesian Mystik – record holders for the most top 10 hits for a New Zealand band – and The Koi Boys, who wowed audiences on both sides of the Tasman with their performances on The Voice. The Koi Boys’ debut album Meant To Be went to number one in the New Zealand Top 40.

Kings, whose debut single Don’t Worry Bout It broke Lorde’s record for most consecutive weeks at number one, will perform along with Vodafone New Zealand Music Award winner MAALA (Kind of Love) and Christchurch band nomad (Oh My My).

Dunbar explained “Wellington Sevens is a couple of days of fun in the sun – watching world-class rugby, dressing up, having a good time with mates, and music is a big part of that.

“We’re thrilled with the line-up of New Zealand music we’re bringing together and fans are going to love it. It’s shaping up to be one of the best gigs of summer.”

Plans to revitalise the event also include a party zone in the stands where ‘rugby meets rave’, a ‘fizz and food alley’ and match-up of Wellington bars with competing team.

The Wellington Sevens, a sell out event in its earlier years, has struggled in recent years with dwindling attendances. About 14,000 people turned up to Westpac Stadium on the Saturday in 2016, and 15,500 on Sunday at a ground with a capacity of 34,500.

Tickets for the two-day event are now on sale with four distinct zones; including a prime viewing Premium Zone on halfway, a Mix Zone where fans will enjoy live music in the stands, the Family Zone with interactive fun for all ages and the Silver Zone with great viewing of the action and off the pitch.

However, Dunbar believes organisers are on the right track at getting more people into Westpac Stadium adding "it's about looking at the entire fan experience and just trying to build upon it."

Image: Crowds in fancy dress at the 2014 7s Wellington.