With football’s popularity in Australia surging thanks to the FIFA World Cup and the growth of the A-League, a new study has revealed that supporters feel more “connected” to the sport as a result of a sponsor involvement than fans of cricket, rugby union or the Olympics.

In its recently published Football Passion Drivers study, sport and entertainment marketing firm Octagon, found significant growth in avid followers of the game with number s growing from 2.7 million in 2012 to 4.9 million this year.

“The increasing significance of the world game in Australia should not be underestimated by brands, broadcasters or those within the sport.

“However, sponsorship awareness remains comparably low, highlighting an opportunity gap for sponsors to make their mark and win heart and minds.” 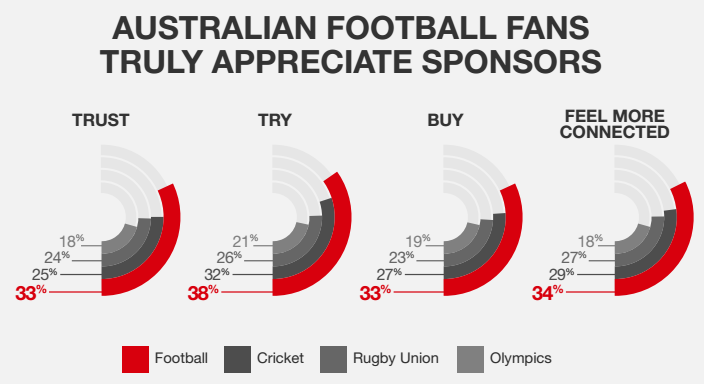 The study found that a third of football fanatics trust a sponsor, ahead of followers of cricket (25%), rugby union (24%) and the Olympics (18%).

In addition, Octagon found 34% of football fans feel more connected to a company which sponsors the sport, higher than the other sporting codes. Just under 30% of cricket fans are trust a sponsor, ahead of rugby union (27%) and the Olympics (18%).

However, the study also found that overall awareness of sponsorship remained low, the study indicated.

Commenting on the potential for sponsors to Sponsorship News, Octagon Strategy Director Simone Errey added "any sponsor, be they associated with local or international formats of the game, as an existing sponsor or a newcomer, has the chance to step up, make a mark, and win the hearts and minds of these consumers.

“It’s a great time to be a sponsor of football in Australia. The challenge for brands is effective activation

"When you combine this with the fact there are 4.9 million highly passionate and engaged individuals ready to embrace sponsors, the opportunity in football is obvious."

While the research showed 64% of fans put the World Cup as their favourite format, the growth in interest in the A-League is confirmed by 91% of respondents watching matches in the last 12 months.

The findings came after Octagon spoke to 500 self-described ‘avid’ football fans and compared the responses to those of fans of other sporting codes.