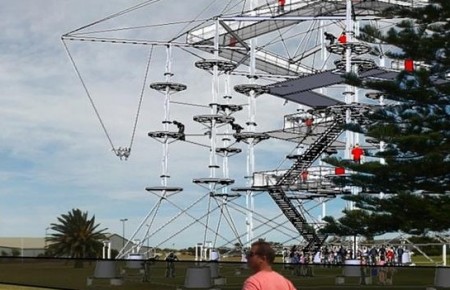 Australia’s first freestanding aerial adventure playground is currently under construction at the Adelaide Shores precinct in the West Beach area of the South Australian capital.

Plans for the 26 metre-high rope obstacle course and climbing frame, to be known as the Mega Adventure Park, were agreed last year and the project is expected to be completed before the end of the year.

The attraction includes a four-storey climbing frame, with obstacles such as swinging tyres, hanging vines and plank walks, which users will navigate while harnessed and tethered.

The structure would also include viewing platforms at each level.

The adventure playground is being built on vacant land to the west of Adelaide Airport by the West Beach Trust - which operates under the Adelaide Shores name.

Commenting on the development, Adelaide Shores Chief Executive Kate Williams said the attraction is the first of its kind in Australia and that its expected usage will come from schools and sporting groups, as well as corporate and fitness markets.

Speaking to media last year, Williams stated “there are a number of highly successful examples (of similar courses) across the globe, particularly in Europe and Asia, and building one at Adelaide Shores (will) put South Australia on the map for adventure tourism and recreation.

Williams said the development was in keeping with West Beach Trust board’s requirements to “manage the land as a state-significant tourism and recreation precinct”.

The park is being designed by adventure tourism company TouchCloud Global.

TouchCloud Global Director Matt Scott said the course would be the first freestanding aerial adventure park in Australia, explaining “the others are all tree based, so this has a different feel and it allows us to have a more family orientated experience.”

Adelaide Shores was won the award for Excellence in Sustainable Tourism at the 2014 south Australian Tourism Awards.