End of an era as Wild Wadi’s Sceirah pulled down 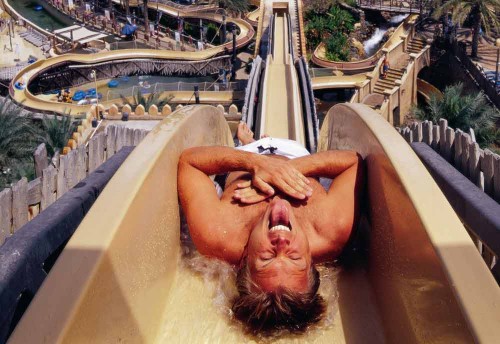 The most famous waterslide in Dubai will be pulled down to make way for new rides that are to be unveiled later in the year.

The park has been closed since the 11th January for annual maintenance and refurbishment, with deconstruction of the ride already underway.

Wild Wadi have released a commemorative video on You Tube, marking the end of the Jumeirah Sceirah era, with General Manager Chris Perry descending at 80 km/h down the 33 metre slide for the last time.

The waterpark has undergone major redevelopment in recent months with two new rides opened to the public in 2011.

Created by WS Atkins, the engineering and design consultancy firm behind Burj Al Arab and Jumeirah Beach Hotel, Wild Wadi waterpark is designed around a tale from Arabian folklore featuring Juha and his seafaring friend, Sinbad. The design and attention to detail, including characters to support the theme, led to a World Waterpark Association Industry Innovation Award for Outstanding Accomplishments in Design and Theming in its opening year.

Watch a YouTube video of the Jumeirah Sceirah at www.youtube.com/watch?v=6RhZvky0JCQ

Image: Wild Wadi Manager Chris Perry takes one of the final rides on the Jumeirah Sceirah.