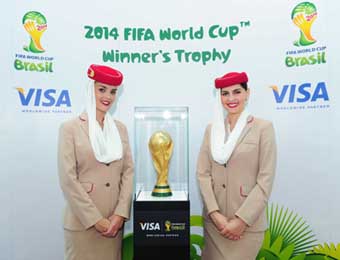 A senior executive at Dubai-based airline Emirates has claimed the airline is "seriously thinking" about not renewing its commercial partnership with FIFA after criticising world football's governing body for having apparently "overlooked" the sponsor during turbulent times for the Federation.

Emirates is currently one of six global FIFA Partners alongside adidas, Coca-Cola, Hyundai/Kia Motors, Sony and Visa having, in 2006, signed a US$195 million deal with FIFA to become its partner from 2007 to 2014.

However, Boutros Boutros, Divisional Senior Vice-President of Corporate Communications and one of Emirates' most senior executives, has stated the company has had no contact with FIFA during its various crisis this year and felt it had been "overlooked" by the Federation.

Emirates has now commissioned research into its association with FIFA to see if there has been any long term-damage to its brand, with Boutros stating "we are seriously thinking about not renewing our partnership with FIFA beyond 2014."

In an interview with Australian marketing and media publication B&T, Boutros added "we don't get into politics but we believe the situation with FIFA went beyond an internal problem and became much bigger.

"As a sponsor you expect they will come and write to you in the middle of the issue or at the end of it. To them they act as if it's nothing for sponsors. For us, in our history of sponsorship, it is the only event that when it happened our clients started writing to us saying 'why do you support this organisation?'"

Boutros' comments make Emirates the first of FIFA's key partners to speak candidly on the scandal that has stalked football's corridors of power in recent months.

Emirates will now study the findings of its research into its brand status before making a final decision on its future FIFA commitment, which needs to be made by June 2012.

Boutros concluded "you'd expect at certain times that FIFA would send you some assurances so that we don't read about it in the newspapers or press conferences when you are one of the main partners.

"There is nothing telling you these things will not happen again."