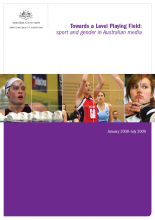 During a keynote address at the IWG Women and Sport Conference in Sydney, Federal Minister for Sport Kate Ellis has release a "fascinating" new report on gender, sport and media.

Minister Ellis explained that "the promotion of women in sport has been identified by the Australian Government as a key focus area for the future development of sport in Australia.

"The Australian Sports Commission, through its Women and Sport unit, is working towards achieving greater recognition of womenâs sport and female athletes in the media, and improving leadership opportunities."

The completed research report, Towards a Level Playing Field: sport and gender in Australian media is available at www.ausport.gov.au/participating/women/research