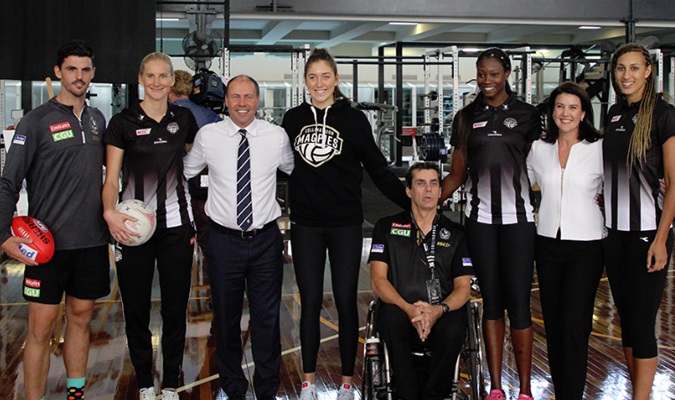 In the latest example of a Federal budget commitment being highlighted in the Australian election campaign, Federal Treasurer Josh Frydenberg has been promoting a $15 million injection of taxpayer funds towards the first stage of a $70 million project between Monash University and the Collingwood Football Club to create a sport and medical research hub that will, as its major focus, research injuries in female players.

The joint Monash University and Collingwood Football Club project, to be known as Victoria Sport, will create a sports performance, development and medical research hub as well as new and improved facilities for AFL Womens and netball at Melbourne and Olympic Parks

The Victoria Sport project will look at injury prevention, treatment and recovery as well as improving participation and performance from the community to the elite levels. It will also focus on developing programs to increase Victorian’s participation in sport particularly amongst Indigenous communities, people with a disability and new migrants.

Speaking today, Treasurer Frydenberg stated “Victoria Sport will be a world-first, multidisciplinary hub for sports medicine research and knowledge sharing. It will enhance performance and the physical and wellbeing of people involved at all levels of sport.”

Through Victoria Sport, Monash University and the Collingwood Football Club, will distribute research discoveries and world-leading expertise to create maximum impact in the community. The hub will connect to Monash’s higher education and research expertise, health services, health professionals and clinical networks at major metropolitan Melbourne hospitals and throughout regional Victoria.

Collingwood President Eddie McGuire said being able to offer a service to all athletes and drive research outcomes that may improve the health of all Australians makes Victoria Sport a necessary addition to the nation’s sports landscape.

McGuire stated “our club seeks to play a major role of social responsibility and leadership and Victoria Sport will enable us to drive key health and well-being initiatives across all sports and at all levels.

“The new facilities will underpin our position as a national sporting club and our commitment to women’s sport. We share the Government’s vision to boost women’s participation in sport at all levels. Victoria Sport will also link to our major community partnerships and regional footprint, and to our teams in AFL, AFLW, Netball and Wheelchair AFL.”

Monash University is renowned for its research capacity in trauma and brain injury, neuroscience and mental health, injury prevention and rehabilitation, genetics, genomics and medical technology.

“This funding will create knowledge that will be shared across and benefit our sporting communities.”

A study by the AFL found the incidence of concussion causing missed matches in the first two AFLW seasons was double that compared to the AFL 2017 season.

Georgia Fuller Symons, a PhD student with Associate Professor Sandy Shultz, from the Monash University’s Department of Neuroscience Trauma Group, is studying gender differences in AFL players to concussion on the field. The study looked at over 100 amateur AFL players from men’s and women’s clubs, as well as athletes involved in non-collision sports.

Fuller Symons, with her colleagues, looked at eye tracking post-concussion (as evidence of impaired brain function) as well as DNA changes that have been shown, in animal studies, to be a marker of mild brain injury. According to Shultz/Fuller Symons, the aim is to both provide new more reliable tools for diagnosis and monitoring of brain injury recovery (long and short term) following concussion and to look for any differences in the ways that men and women respond to concussion in play. This would significantly improve medical decisions and the management of concussion in sport.