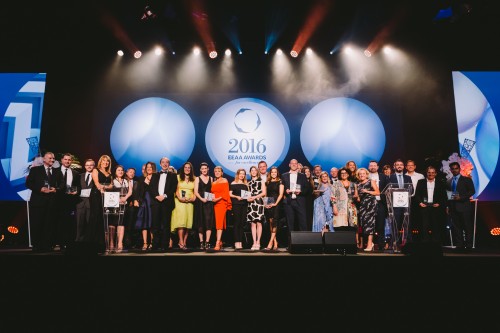 The Exhibition and Event Association of Australasia (EEAA) has celebrated the industry’s highest achievers at the 2016 Awards for Excellence held at the new International Convention Centre Sydney (ICC Sydney).

The awards ceremony, an official pre-opening test event, was attended by over 300 people representing organisers, association organisers, venues and suppliers from across Australia and New Zealand who helped test the new venue under event conditions.

EEAA Chief Executive, Joyce DiMascio, said the diversity in submissions for the Awards reflects the broad range of events, venues and services in our industry, stating “entries were assessed by 32 independent judges from across Australia and covered over 20 industry categories from pop culture, energy and resources, IT and health.

“Thank you to the judges for supporting the EEAA in its mission to recognise excellence, and to our Association Members for submitting their work to be reviewed by industry peers. We hope the winners will display their trophies and the winner seal with pride.”

Chair of Judges, John Trevillian, said it was an honour to oversee the judging for a second year in a row, adding “the increase in awards this year is a testament to the regard with which these awards are held.

“The quality of submissions continues to improve. This year there was an almost 20% increase in award entries and this meant the competition in some categories was very tough.

“For this reason seven categories have a highly commended as well as a winner. It is unusual for the judging to be so close.”

Among those honoured were the two winners of the Richard Geddes Young Achiever Award – Anne-Marie Mina of Exhibitions and Trade Fairs and James Kennedy of Exhibit Systems.

The Best Show for 2016 was awarded to Hair Expo Australia 2016, organised by Reed Exhibitions Australia.

This year’s newest award, Best Association Event, recognises Association events and the role these events play in growing their Association and the industry sector they serve. The award was open to either an Association Member, or a commercial organiser who was engaged to deliver an association client’s event. Reed Exhibitions Australia and their association partner Interactive Games & Entertainment Association took out the award for PAX Australia. 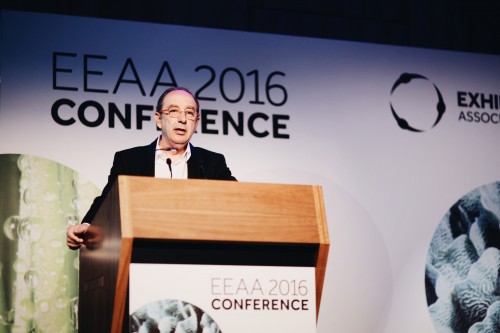 EEAA President Spiro Anemogiannis also presented the Trevor Riddell President’s Award to Domenic Genua for his service to the Association.

Anemogiannis said Domenic Genua is a passionate individual who has given 13 years of service to the EEAA and its board – sharing selflessly for the benefit of the whole industry.

Anemogiannis explained “the President’s award this year is being presented to someone who embodies the essence of the exhibition and events industry, and importantly, the value that associations play in building a community of professionals.”

Federal Minister for Trade, Tourism and Investment, Steve Ciobo, congratulated the award winners and finalists via video message, stating “the business events sector is a major economic driver, not only for the visitor economy but also in the generation of trade, investment and employment.

“Thank you for being part of Australia’s business events success story, congratulations to the winners and finalists tonight.”

DiMascio said that the Awards for Excellence recognises leadership within the industry and spotlights the achievements of our Members.

She concluded “we thank all those who entered our Awards for Excellence – congratulations to our winners and thank you to our event partners, sponsors and the ICC Sydney for making this our industry’s most celebrated night.

“Our return to Darling Harbour, Sydney and the new ICC Sydney added a special dimension to the event. We thank ICC Sydney for including EEAA’s finale events for 2016 as official pre-opening test events.”

EEAA was assisted in the curation of the awards show by Australia’s leading creative director, Paul Kenny. The room was dressed by Decorative Events & Exhibitions and featured an interactive media wall by Displayground to present additional background information on finalists. The Monkey’s Cobbler created the awards show animation. The night was hosted by Maeve O’Meara and entertainment was by Quality Control Entertainment. 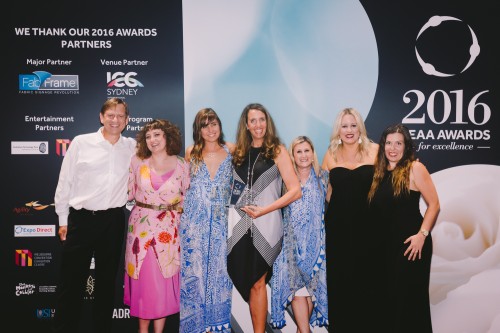 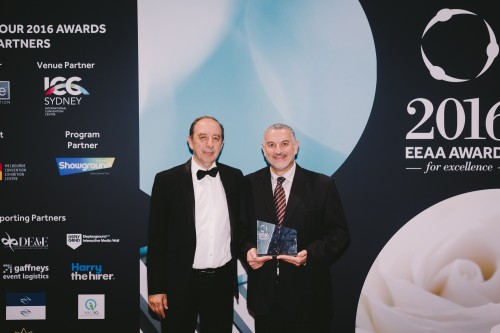 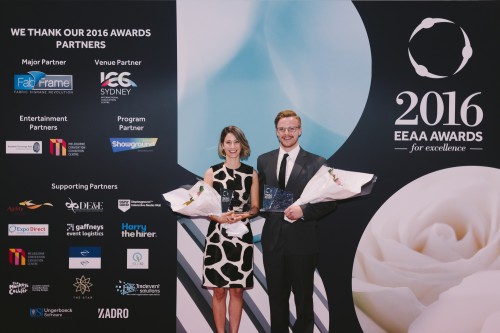