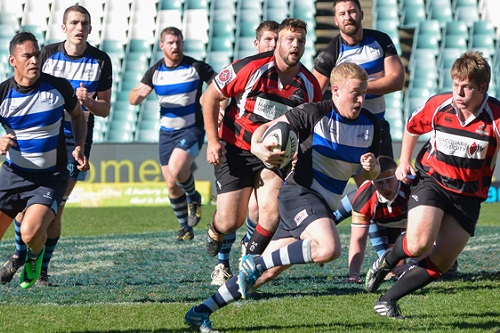 Preliminary analysis of research from Monash University’s Sport Inclusion Project has found that while homophobic language persists at alarming rates in junior rugby union, educational training can change attitudes to the use of slurs in sport.

As reported by the Guardian Australia, results of the study - which was undertaken by every Under-18s and Colts (Under-20s) rugby team in Victoria, and every Under-18 team in South Australia - also suggest that while homophobic language has a detrimental effect on LGBTI people’s health and wellbeing, homophobia is not the primary driver behind the use of slurs.

The study found that 78% of participants said they had heard teammates use homophobic slurs like ‘fag’ and ‘poof’ during the two-week study period, while 60% admitted to using those words.

However, the language was not simply directed at players who were perceived to be gay but was used as a generic insult, with nearly half of players saying they were also targeted by those slurs in the last year.

When players were asked why they and others used homophobic slurs in rugby, they overwhelmingly responded that the language was ‘thoughtless’ or intended as a ‘joke’. Following that, the boys and men surveyed admitted that they directed homophobic slurs at others in an effort to prove they were a ‘man’. The least nominated reason for using homophobic slurs was to bully a teammate who was gay.

This data correlates with the finding that on the whole, young rugby players did not condone homophobic bullying - with a clear majority saying they would stop others bullying a gay teammate and were comfortable with having a gay teammate. 71% said rugby would be ‘more fun’ if homophobic jokes weren’t part of its culture.

Nonetheless, in a sample of 231 players from Victoria, not a single player said they were gay or bisexual, while there was only one self-reported gay player in South Australia.

Erik Denison, lead researcher of the Sport Inclusion Project in the Behavioural Sciences Laboratory at Monash, said the results showed a disconnect between players’ positive attitudes towards gay people and their persistent use of homophobic language.

He explained “this language would clearly make young gay people feel unwelcome in sport and it appears heterosexual players also don’t like this language.

“I suspect this language continues because it is self-perpetuating.

“It seems no one is telling the boys to stop using the language, and they aren’t stopping each other, so there is no reason to believe this language will stop on its own until sports take meaningful action.”

The research that Denison and his team have been carrying out is a legacy of World Rugby’s commitment, in 2015, to establish a formal alliance with International Gay Rugby in an effort to stamp out homophobia in sport - and the subsequent devastating effects on LGBTI people’s health and wellbeing - documented in international research study Out on the Fields.

In what Denison and his team describe as a world first, Rugby Australia and Rugby Victoria have been working on implementing a training program - with the help of the Melbourne Rebels rugby team and funding from the Australian government, the Sydney Convicts and Woolhara Colleagues - to educate men about the negative effects of homophobic language, with the goal of its eradication.

In the trial program, Tom English, the Melbourne Rebels captain, and his teammates visited half the clubs in the survey sample, and delivered training targeted at emphasising the importance of ‘diversity’ in rugby clubs. Subsequent analysis demonstrated a significant change in attitudes, with players less likely to condone the use of homophobic slurs after participating in the training. Players also reported being more likely to intervene if they were party to homophobic language being used.

English, who is also the vice president of the Rugby Union Players’ Association, said the program was a vital initiative, particularly because many of the boys he spoke with had never been educated about the impact of homophobic language.

English advised “I remember when I was younger, I would come home from rugby and I’d be swearing at home and my mum would ask me why I was using (such) language.

“I realised it was because I had just been in this male-dominated environment where you need to prove you are tough and people use this language to do this ... (however), regardless of whether the language is unconscious or not, players need to understand it is hurtful, that it is deterring people from playing rugby, and also causing people to try to hurt themselves.

“When you tell people that gay people have a six-times higher rate of suicide than straight people and the language they hear is a big reason for this, I think it helps them really understand why homophobic language needs to stop.”

Buoyed by the initially promising results of the training program, Rugby Victoria has this week committed to rolling out a similar package to all rugby union clubs across Victoria, while the Rebels will next year compete in a Pride Cup in partnership with Pride Cup Australia.

The initiative is being closely watched by other major sporting codes in Australia, with the AFL to trial a similar training program next year, while one is already underway and being evaluated within ice hockey.

Denison added “it’s all about changing the banter at clubs.

“We don’t want to get rid of banter, we think it’s important for sport, for team bonding, for having fun, but it’s about stamping out banter that’s proven to be harmful.”