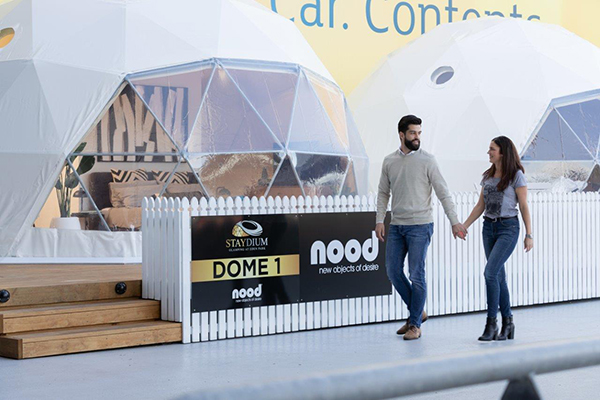 Auckland’s Eden Park has secured an international award for ‘Product Innovation’ for its Staydium Glamping experience after competing against several major venues in the American stadia industry.

TheStadiumBusiness Awards, based in the United Kingdom, recognises leadership, innovation and achievement in the delivery, operation and management of leading sports facilities globally.

Staydium Glamping began in July 2019 after the venue identified spaces around the facility that could be utilised for new concepts. Two custom-designed domes sit in the north-eastern corner of the 117-year-old stadium and overlook one of the world’s most famous playing fields.

Eden Park Chief Executive Nick Sautner enthused “we are thrilled that Staydium Glamping has been recognised on the world stage for the unbeatable accommodation experience it offers both local and international tourists.

“More than ever, during this unprecedented time, Eden Park is a blank canvas to attract new experiences to the city all whilst delivering significant economic benefits to our community.”

The product attracted attention from both local and offshore tourism operators, demonstrating widespread interest in the experience. Given the stadium’s growing reputation for pioneering revenue streams, industry publications have followed updates closely which has cemented the stadium’s growing position as a market leader.

An enviable view of the hallowed turf, private bathrooms and premium finishings are some of the benefits the Staydium Glamping boasts to ensure guests don’t miss any of the action unfolding below them. Thanks to furniture supplier Nood, guests enjoy a luxurious experience as they lay down to sleep. If movies or sport is on the menu Sky TV, Netflix and Spark Sport are available to enjoy on Samsung’s state of the art appliances, as well as having the comforts of Le Creuset crockery and Dyson personal products.

The two-person facilities are available to be booked via staydiumglamping.com or via Airbnb on both match days and non-match days.

To celebrate the win, Eden Park is offering special pricing of $199 per night and vouchers for future use can be purchased here.