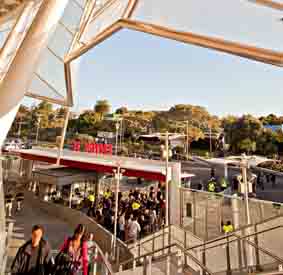 While the stadium's turf may look the same (although it has been relaid on a number of occassions since 1987) Eden Park has been transformed in the 24 years since it hosted the first Rugby World Cup final.

Long before the first ball of the 2011 Rugby World Cup was kicked, a major redevelopment project transformed the iconic stadium.

Set to leave a legacy for New Zealand rugby long after the final whistle of the Rugby World Cup, the redevelopment saw the historic South Stand replaced in its entirety plus an extension of the East Stand, along with a range of other upgrades designed to enhance the experience of the viewing public.

Populous, the world's leading architects for sports venues, produced a design that reduced noise and light overspill to the surrounding residential properties while leading construction firm Fletcher Construction was appointed as main contractor.

International flooring specialist Flowcrete was selected to provide a complete floorzone package for the various zones of the new South Stand at Eden Park.

Flowcrete Australasia Managing Director Sean Tinsley explains that selecting the right floor finishes for the stadium required an in-depth understanding of the performance requirements of each area.

Tinsley states "stadia by their very nature feature vast spaces. Huge volumes of spectators mean that the large majority of these spaces are likely to experience heavy foot traffic.

"Some areas are exposed to the external elements and also need to accommodate vehicular traffic, while others such as large public concourses need hard-wearing yet decorative flooring."

Conditions in back of house areas such as kitchens, washrooms and plant rooms present another challenging set of criteria including the need for frequent wash-downs, easy cleanability and slip resistance, as well as high spillage levels, impact from dropped objects, and exposure to chemicals and other harsh substances.

Tinsley adds "there are some unique challenges associated with a face seal stadium building like Eden Park. For example, the structure presents different flooring specifications to accommodate differentials in movement. "

For the external seating areas or bleachers, Flowcrete's watertight deck-coating Deckshield system was selected. The elastomeric polyurethane resin system is British Board of Agrement approved and certified to the very stringent ASTM C957.

References were available on a number of similar large stadium projects including Wembley and Emirates Stadium in the UK and the ANZ (formerly Telstra) Stadium in Sydney.

For the members' concourse area, a seamless terrazzo type system known as Flowfast Terrosso was specified to provide a hard-wearing yet decorative finish. This fast-cure flooring system is ready for use within two hours of application, allowing large expanses of flooring to be installed quickly and enabling following trades to start work immediately. In the kitchens, a resin system known as Peran STB was installed to give a hard-wearing, easy to clean finish.

As Tinsley concludes "aside from offering a wide choice of systems for almost any application, the added benefit of the complete floorzone solution is that it comes backed by our single-source warranty.

"This and the strength of our partnership with Flostone were key factors in confirming to the architects, the main contractor and the end client that we had the right combination of technical skill, international track record and installation expertise needed for the Eden Park project."

Flostone Director Deborah Chester believes the quality of the workmanship by Flostone is testament to the firm's long track record in the flooring industry, stating "it was a massive coup for us to be awarded this high profile prestigious project. Thanks to the high quality flooring systems from Flowcrete and our in-house installation expertise, the Eden Park stadium is now a world-class facility that will provide a lasting experience for sports fans for years to come."