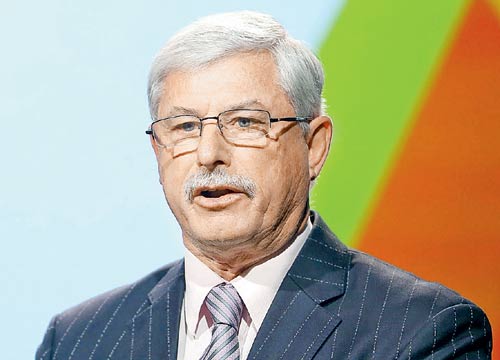 Explaining the appointment Ecoglo Executive Chairman Trevor Dimond stated "Sir Richard's deeds on the cricket field are well known. As a player Sir Richard was totally committed to excellence and high performance - the consummate professional, he was analytical and disciplined, always striving to be the best in the game.

"He earned the respect of the cricketing world wherever he displayed his skills. At Ecoglo we share the same values that made Sir Richard such a dominant global player. Our team is proud to be associated with Sir Richard as we aspire to be the very best in our field."

Over the past 10 years has been installing its innovative glow-in-the-dark signs, step nosings, handrail strips and edge strips as part of emergency lighting system for buildings, infrastructure and stadiums around the world.

Landmark projects have included Burj Khalifa in Dubai, the world's tallest building, to sport stadiums including the Melbourne Cricket Ground.

Welcoming his role with the company, Sir Richard Hadlee explained "I am delighted to be a Brand Ambassador for Ecoglo. I like their professionalism and the initiatives they have taken to promote the company and the products. We now live in a safety conscious environment and Ecoglo are in the business of making stadiums, buildings, and other areas safer to work and play in."

Sir Richard says there are three main reasons why he joined a company like Ecoglo, adding "it is important the company has credibility; it needs to have very good products and it is important that I can relate to the people who are involved. In all aspects I can the tick those boxes."

Sir Richard recently led a group of around 50 engineers, architects, code officials, fire engineers, fire service people, safety and building companies at a 'lights out' walk through demonstration. The practical demonstration saw the group descend three flights of stairs in a dark stairwell to highlight the effectiveness of the product.

Neale Graham, Senior Electrical Consultant at Opus International Consultants, a participant at the walkthrough said, "it's a really great product and we've specified it extensively for both exit signs indoors and escape route lighting outdoors. It's so easy to install and being maintenance free, you can forget about it as you don't have to worry about power supplies or backup batteries or ongoing testing."

Trevor Dimond added "the Christchurch earthquakes showed that our sustainable and non-powered emergency lighting has real advantages over electrical systems. Everyone in Christchurch can relate to dark stairwells with no lighting or signs."
Ecoglo's products are made from photo luminescent materials produced by the company's patented manufacturing process. The lighting and signage systems harness sunlight and electrical lighting. The signs are then able to glow brightly when the lights are out to allow people to find their way out of buildings.

Photo luminescent exit and emergency signs are specified as an Acceptable Solution in the New Zealand Building Code released in April this year. Ecoglo's products are designed to meet clause F8/AS1 Signs and meet the code 'out of the box'.

Sir Richard Hadlee was the first player to take 400 test wickets; his best bowling performance was 9 for 52 against Australia at the Gabba in 1985; and he scored over 3,000 test runs including two centuries. Wisden ranked him as one of the 10 greatest cricketers of the 20th century.