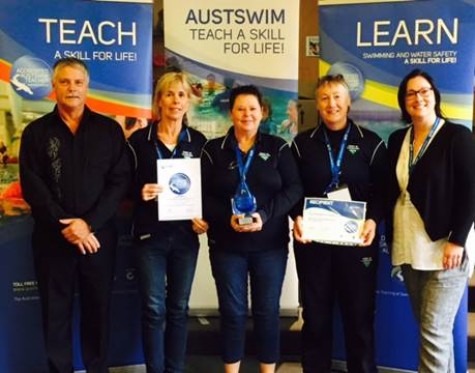 The Echuca War Memorial Aquatic Centre and Melbourne-based swim teacher Paul Dew have each been named as recipients of significant national awards from AUSTSWIM.

The Echuca Aquatic Centre has received the 2016 National AUSTSWIM Recognised Swim Centre Award, supported by the YMCA, at the 2017 Victorian Metro Stream Aquatic Conference and AQUASUMMIT.

Serving the Echuca community on the Victorian banks of the Murray River, the Echuca Memorial Aquatic Centre was recognised for excellence in aquatics education.

The Shire of Campaspe took over the management of the centre in November 2014 and since then the numbers of student enrolments and licenced teachers has continued to grow.

The aquatic and recreation acility is home to a 50-metre, eight-lane indoor heated pool, toddler pool and baby pool. It offers a range of swimming, water safety and aquatic activities.

Its staff, many of whom have been AUSTSWIM licensed and accredited teachers of swimming and water safety for up to 20 years, lead classes for all abilities and ages.

Paul Dew, from Forest Hill, Victoria has also been named the recipient of the 2016 National AUSTSWIM Teacher of Swimming and Water Safety Award, supported by the Royal Life Saving, presented at the 2017 ‘Soak It Up’ Victorian Metro Stream Aquatic conference and AQUASUMMIT.

Dew teaches in Melbourne’s eastern suburbs at Just Swimming Syndal, Nunawading and Tintern Grammar and has been described as a ‘true teacher’, instilling confidence in his students to thrive in the pool while his calm and inviting approach creates engagement with students giving him their full attention to him.

The award is one of eight national AUSTSWIM awards that recognise brilliance, commitment and innovation in the teaching of swimming and water safety.

Dew has been teaching swimming and water safety for three years, is licensed in the AUSTSWIM Teacher of Swimming and Water Safety, Teacher of Aquatics – Access and Inclusion and the Teacher of Towards Competitive Strokes accreditations.

Over the past two years Dew has been given the opportunity through 'Just Swimming' to help a small 'Red Dust' team, by sending him twice into the remote community of Yuendumu in the Northern Territory to teach Swimming and Water safety.

He explains “teaching remote indigenous kids has been quite re-energising for me.

Dew enjoys seeing results and the positive feeling of having helped someone achieve or improve important life skills, adding”it’s doing a job that I feel I can contribute useful lasting value in.”

For more information about AUSTSWIM and the range of courses available to those wanting to become licensed teachers of swimming and water safety, go to www.austswim.com.au