Eastern quolls return to Australian mainland after more than 50 years 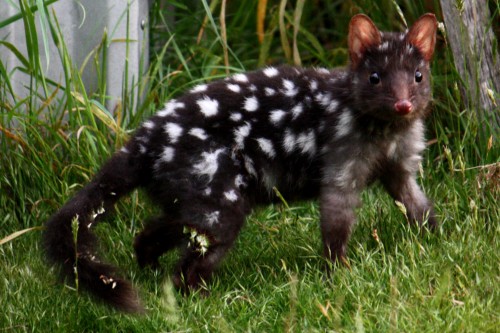 The eastern quoll is making a comeback to mainland Australia, from where it disappeared more than 50 years ago, with a new generation introduced in the Australian Capital Territory.

A team of researchers from the Australian National University has reintroduced a group of wild eastern quolls from Tasmania into the Mulligan’s Flat Woodland Sanctuary in Canberra.

Professor Adrian Manning, who led the team from the ANU’s Fenner School of Environment and Society, said it was the first “translocation” of wild eastern quolls “into a free-ranging situation” on the Australian mainland.

Professor Manning told the Guardian Australia “our aim is not just to establish a healthy and diverse population of eastern quolls but also undertake critical research to understand the best way to introduce the species to improve success in future reintroductions on the mainland.”

ACT Deputy Chief Minister Simon Corbell told City News the introduction of 14 animals as of last week was “an important milestone in the sanctuary’s ongoing restoration” and could lead to more being moved to Mulligans Flat over the next two years.

Once widespread in south eastern Australia, quolls – which weigh up to 1.3 kilograms and eat insects, fruit and animal carcasses – are now only found in the wild in Tasmania.

Their extinction is linked to habitat loss, introduced predators such as foxes and cats, disease, accidental poisoning and deliberate persecution by humans.

The quolls introduced to Canberra have been fitted with radio-tracking collars, with Professor Manning hoping that their progress will inform continuing debate as to whether captive-bred or wild quolls are more successful in establishing new populations.

He said the eastern quoll reintroduction – part of an $1.8 million research partnership between the ACT Government, ANU, CSIRO and James Cook University – was a “long-term project”.

He concluded “to be at the stage where we release quolls straight into the wild is rewarding for everyone involved because we are not only building on our science but also leaving a legacy that can have an impact throughout Australia.”

The Mulligans Flat sanctuary is managed in partnership between the ACT Government and the Woodland and Wetland Trust.