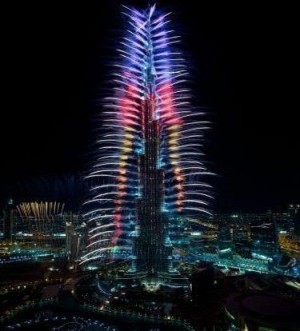 Dubai has welcomed in 2015 with a huge firework, light and sound extravaganza at the Burj Khalifa, the world's tallest tower.

The 828 metre high tower was lit up with fireworks, LED light and laser beam displays, is believed to have been the world’s most-watched New Year’s Eve spectacle.

The event was attended by a large crowd and was also live streamed on Youtube with four different camera angles including an aerial view from three drones which were introduced this year, for the complete effect. Additionally, live feeds of the event were telecast over major international channels reaching billions of people around the world.

Emaar Properties Managing Director Ahmad Al Matrooshi explained "the Downtown Dubai New Year’s Eve Gala is a symbol of Dubai’s positivity and its ability to inspire, unite and bring happiness to people from around the world.

"The celebration brings hope and joy for a better tomorrow and a promising new era of growth here in Dubai, a global city that provides the opportunity and environment for business and personal growth.”

The fireworks, laser show and multimedia display used the world’s most advanced pyrotechnics and LED illumination technology with professionals from around the world having worked on the project.