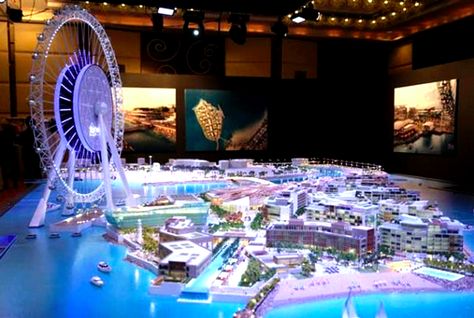 The world's largest Ferris wheel, the Dubai Eye, will be built off Emirate's coast after plans for a Dh6 billion (US$1.6 billion) entertainment project were approved.

The Bluewaters Island project will include the 210-metre Dubai Eye, expected to attract more than three million visitors a year, will surpass the 165-metre Singapore Flyer that was completed in 2008.

To be built by Meraas Holdings, constuction of the project is expected to start by mid-year and be completed within three years.

The first stage of the project, which includes the Dubai Eye, retail, residential, hospitality and entertainment zones, will be ready in two years.

Phase two is expected to be completed within 12 months later and will include low-rise residential buildings.

"This project will continue to build on the emirate's reputation as a leader in the global entertainment and retail landscape."

Dubai Eye hopes to offer panoramic views of Dubai's coastline and landmarks such as the Burj Al Arab, Palm Jumeirah and Burj Khalifa.

To be built on an island connected to the city by a road and monorail, the project will feature a souq, a promenade, restaurants and a food hall offering fresh produce, a five-star hotel and private homes, all of which will be connected by a monorail and a cable car.

Dubai is starting new projects and reviving developments that stalled when the property market collapsed in 2008. The emirate, which racked up over $110 billion of debt turning itself into a business and tourism hub, last year approved the construction of five theme parks days after saying it plans to build a new district to include a shopping mall that will break the size record currently held by the Dubai Mall.

Market analysts are confident the new initiatives will take shape and boost tourism.

Colliers International Regional Director Ian Albert explains "anything that continues to add to the diversity is a good thing.

"In order to grow as a tourist destination, it is not the size but it is the ability to constantly bring something new to get people to return for the second, third and fourth time."