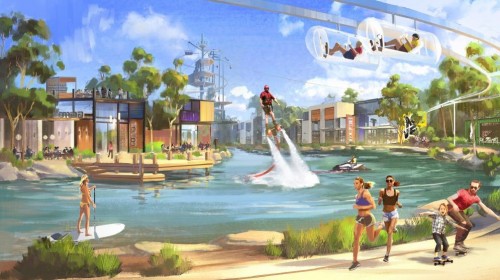 A Dubai-backed development company has announced plans to build a $400 million sports theme park on the Sunshine Coast.

Picking up on plans first announced in 2014, the family-orientated project aims to offer a range of activities and adventures with a waterpark featuring a “wave reservoir” and water sports facilities, a sports training and development centre, a 4-star hotel, exhibition and conference centre, cafes and restaurants, international and local retail outlets and parking.

Introducing the concept for the new attraction, Sanad Capital Chief Executive Bradley Sutherland stated “this will strengthen the viability of the surrounding tourism infrastructure and increase the area’s competitiveness as a regional and international tourist destination.”

Sanad said the project would offer 2,000 direct and indirect jobs through construction, adding $60 million a year to the economy in the build phase, totalling $260 million at finish.

The project has preliminary approval from the Sunshine Coast Council for a wave park and tourism facility.

Sutherland said he hoped the project will contribute to the consolidation of active leisure and visitor attractions on the Sunshine Coast, adding “essentially, this will strengthen the viability of the surrounding tourism infrastructure and increase the area’s competitiveness as a regional and international tourist destination.”

Long identified as having an ideal market position for a major waterpark, the past decade has seen a number of theme and water park projects proposed for the Sunshine Coast, none of which have reached the building phase.

A decade long plan for the development of the Aventura Waterpark in Caloundra ended in 2009 with Village Roadshow Theme Parks announcing plans to acquire Aussie World and redevelop the site as a waterpark.

Village’s plans were eventually thwarted by the high cost of road improvements that they would have been required to implement on the Pacific Motorway.

Image: A concept for the new attraction.