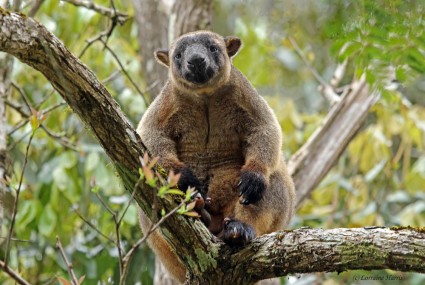 Animal handlers at Gold Coast theme park Dreamworld have announced the birth of a new joey born to the shy Lumholtz's tree kangaroo.

The joey has been born to Mindi, one of three females in Dreamworld's breeding program, which began almost two years ago.

It was the second pairing of Mindi with father Csi that achieved a successful result with a recent health check having revealed that a tiny joey had ascended to the pouch.

The breeding animals are sourced from the Tree Roo Rescue and Conservation Centre at Malanda in far north Queensland.

They are animals that have been struck by cars or attacked by dogs and are unsuitable for release back into the rainforest.

Legge explained “these animals have got injuries like blindness so they can't be released into the wild.

"Dreamworld and other institutions have created this breeding program so we can share how amazing these animals are with the public.”

The Lumholtz is one of two tree-climbing kangaroo species in Australia.

Beside dog attacks and car strikes, habitat destruction is another major problem facing tree kangaroos in the wild.

There are two males and three females in the breeding program, funded by the Dreamworld Wildlife Foundation.

The aim is to increase the number of adult tree roos in the park to nine.

Dreamworld staff said the joey's father, Csi, lives in a separate enclosure and would play no parenting role.

Legge adds “they are solitary in the wild and the males can fight aggressively with the other males and females, and they are dangerous too around the joeys.

"So it's only the mother and the joey in those small family groups that you'll find together out in the wild.

"We are just so excited about this joey.”

Image shows a Lumholtz's tree kangaroo in its natural habitat.