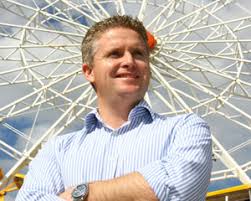 Dreamworld has appointed Scott Fahey as its new General Manager for Sales.

With more than 10 years in the tourism and hospitality industry, Fahey has overall responsibility for expanding revenue streams for Gold Coast attractions Dreamworld and WhiteWater World, in addition to working with the executive team to help launch new experiences into the two parks.

Welcoming Fahey into the company, Chief Executive Noel Dempsey explained that, âScott will bring his enormous networks both here and abroad to the role and he will be charged with expanding sales into new and emerging markets as well as strengthening relationships with traditional sellers.

Completing his first two weeks in the role Fahey added "despite, or because of the economic times, there are still big opportunities out there from the domestic and international market.

"The Gold Coast remains Australiaâs leading resort destination and a rite of passage destination for young adults and families. It's affordable and in the current economic climate that makes it more desirable. Add to that the increased number of carriers flying direct into Coolangatta and I believe there are many more opportunities for Dreamworld and WhiteWater World to capture new business."

Fahey, who has moved his family from Melbourne, said he was looking forward to living on the Gold Coast and working for a high-energy tourism icon.

Prior to joining Dreamworld, he worked with THL (Tourism Holdings Limited), the largest provider of holiday rental vehicles in Australia and New Zealand under the Maui, Britz, Backpacker and Explore More Brands. He started in the company as Commercial Manager before being appointed General Manager of Sales.

Fahey has an MBA from the AGSM in Sydney.