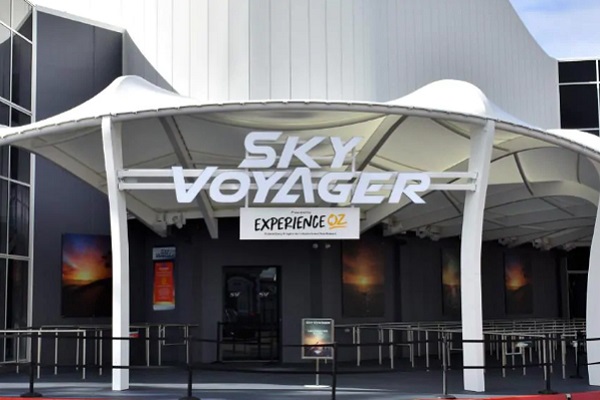 On a significant day for the Gold Coast theme park, Dreamworld has today commenced operations of its new $20-million Sky Voyager attraction.

The Southern Hemisphere’s first ever flying theatre has taken flight on a day when a further $50 million of investments in new rides was announced for Dreamworld.

With Workplace Health and Safety Queensland having issued conditional design registration for the ride earlier this week, guests can now take off and enjoy the spectacular Australian scenery on the world-class flying theatre attraction, complete with modern state-of-the-art technology, motion-programmed seating with live action and special sensory effects such as wind, sound, light, mist and scents.

Developed in a partnership with Brogent Technologies Inc., one of the world’s leading simulation technology companies, the unique Australian experience sees riders flying over Australia’s most iconic landmarks including Surfers Paradise, Sydney Harbour, the Tully River in Far North Queensland and the Barossa Valley in South Australia.

Sky Voyager’s Australian theme was created in a further partnership between Dreamworld and Experience Oz.

As explained by Experience Oz General Manager, Clint Gudenswager “Experience Oz is proud to partner with Sky Voyager and Dreamworld, showcasing all the great things to do and places to see throughout Australia.

“This incredible attraction features a range of experiences that Experience Oz offers across Australia, so for us, partnering with Sky Voyager is a great fit.”

“These locations hosted over 13 million visitors last year, so there is no doubt this world-class experience will continue to take the world by storm.”

The conditional design registration for the SkyVoyager from Workplace Health and Safety Queensland means, according to a statement from the Queensland Government agency, that the ride “has been deemed safe to operate with additional safety controls”.

The statement added “Sky Voyager is now able to enter service (but) as part of the conditional registration, further enhancements to controls are required.

“WHSQ will continue to work with Dreamworld as it implements these enhancements which will enable permanent design registration.”

The arrival of Australia’s first flying theatre is significant as they are part of a growing trend.

Described as “hybrid between the once-popular motion simulator attractions mixed with a large format projection screen system showing off the more natural landscape-oriented content typically shown at Imax/Omnimax theatre”, the Walt Disney Company was one of the first to start this attraction trend with the creation of Soarin’ Over California at its Disney California Adventure Park in 2001.

Since then the technology has also evolved to allow for both large scale and small scale flying theatres making the concept viable for an infinite number of locations.

Originally promoted to open in December last year but delayed by issues with design registration delayed this, the Sky Voyager represents a key part of plans for the theme park’s revitalisation by owner Ardent Leisure.

Dreamworld’s Annual Pass allows holders to be among the first guests to experience Sky Voyager. Annual Passes can be purchased using Afterpay.

Images: The entrance to Sky Voyager (top) and the attraction in operation (below).