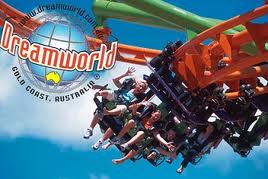 Gold Coast theme park Dreamworld is today marking the 30th anniversary of its opening - a landmark that has been celebrated by the cover story '30 Years Young' in the latest issue of Australasian Leisure Management.

The Dreamworld story goes back to 1974, when Gold Coast developer John Longhurst bought 85 acres of bushland balfway between the Gold Coast and Brisbane.

With the Captain Sturt Paddle Wheeler afloat on Longhurst's river, a handful of other attractions and a lot of heart, Dreamworld opened to the public on 15th December 1981.

The site that Dreamworld now occupies once belonged to a cattle raising family who in 1874 decided to name their house Hollywood Cottage. Their original cottage still stands intact on Dreamworld grounds, as part of Gold Rush Country, where the descendants of the Williamson's stayed on until 1989.

Designers from Disneyland and Disneyworld were employed to manufacture the overall park design, which was further expanded and finished by Australian architects using photographs of early Australian pioneer buildings complimentary to the park's Hollywood Cottage.

Next came attractions, and recalling the first time he sat in an IMAX theatre, Longhurst decided to build Australia's first IMAX theatre. At considerable expense, the theme park pioneer next purchased a vintage Baldwin steam locomotive and fourteen replica T Model Fords at the modest price of $12,000 each. Built at the turn of the century and still running its three-kilometre course around the Park to this day, the locomotive was first used during the First World War in France.

By 1985 it had welcomed its three millionth visitor, while, in 1987, it was voted Australia's best tourist attraction - one of many regional, national and international awards that it has received over the years.

However, only eight years after it all began, Longhurst sold out in order to focus on new tourism ventures on the Great Barrier Reef. Thereafter, the financial turmoil of 1990 saw Ernst & Young appointed as receivers and managers by the mortgagee, IOOF Friendly Society.

In the following five years, a restructured management team invested $40 million in park infrastructure and marketing, refocusing the park and increasing arrivals by 51% - in the process ending liquidation under a Scheme of Arrangements coordinated by Ernst & Young.

In 1995, Dreamworld was sold to Singaporean investor Kua Phek Long, with the Foreign Investment Review Board granting final approval of the purchase in 1996. In the first year of ownership Kua invested a further $20 million dollars upgrading and expanding the park.

In 1999, Dreamworld was acquired by Macquarie Bank subsidiary the Macquarie Leisure Trust. Following internalisation of its management, the Trust split from Macquarie in 2009, changing its name to Ardent Leisure. Today Dreamworld is the country's biggest theme park welcoming some 1.5 million national and international guests through its gates each year. Home to more than 40 attractions, the park's 'Big 7' thrill rides are among the world's tallest and fastest, and include the recently-opened BuzzSaw, The Cyclone, The Wipeout, The Claw, The Tower of Terror II, Mick Doohan's MotoCoaster and The Giant Drop.

Dreamworld also comprises a number of interactive attractions and family zones such as Tiger Island, The Australian Wildlife Experience, FlowRider, V8 Supercars Redline, AVPX and Wiggles World, which combine to position Dreamworld as a hallmark destination in its own right.

Dreamworld's 30th anniversary is the cover story in the November/December 2011 issue of Australasian Leisure Management.