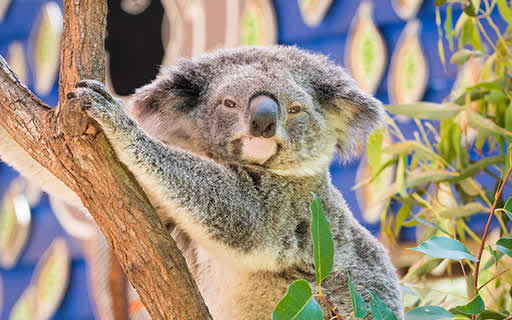 Alethea and Tartar are the first koalas to take up residence at Dreamworld - the two rehabilitated female koalas taking up residence in the Dreamworld Wildlife Foundation’s Futurelab, a new research facility dedicated to the preservation of Australian wildlife.

The Queensland Government recently signed an agreement authorising the transfer of suitable koalas from Moggill Koala Hospital to help Dreamworld and the University of Queensland develop a living genome bank that could be used to improve the health of small, fragmented wild koala populations.

Queensland Environment Minister Dr Steven Miles explained “many of the koalas treated at the State Government’s facility at Moggill including Alethea and Tartar make a full recovery but still can’tsurvive in the wild.

“While their general health is quite good, Alethea was permanently injured and orphaned as a result of a vehicle strike and does not have sufficient mobility to return to the wild, and Tartar is blind.

“These rehabilitated koalas can now look forward to a productive future as we work to revitalise the region’s dwindling koala population.

“The establishment of a living genetic bank is an innovative response to the challenge of protecting koala numbers in the wild in south east Queensland and a great outcome for rehabilitated animals that can’t return to their homes.”

Dreamworld General Manager Life Sciences Al Mucci said this was the first captive breeding agreement for koalas in Queensland, advising “this is an exciting realisation of our long-term vision for Dreamworld as a leading centre for conservation research which ultimately achieves a sustainable future for the koala in south east Queensland.

“We are hopeful that through this captive breeding program the number of joeys born in the first five years will easily approach double figures, which will be an important contribution to the ongoing effort to rehabilitate koala habitat.”

Mucci said the participating koalas and their offspring would be kept in a special enclosure away from the public display areas, adding “we want to be able to release koalas which are bred through this program to the wild and that needs careful and expert management so that the animals do not become used to people.”

Futurelab is a joint project between the University of Queensland and Dreamworld has already secured $600,000 in funding from the Queensland Government’s Advance Queensland initiative and is the first facility of its kind for marsupials in the world.

Mucci said the state-of-the-art interactive working laboratory, included in Dreamworld’s Corroboree Stage Two, would be open to the public in a bid to educate and inspire visitors while undertaking vital work in the science of strengthening endangered species populations.