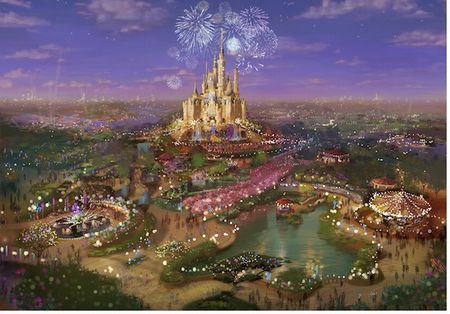 The Walt Disney Company has signed an agreement with China's Shanghai Shendi Group for the establishment of a Disneyland theme park in the city.

The deal was reached with Shanghai-based group, which was specifically created for the development of the Disneyland project, the official Xinhua news agency said on Friday.

Disney confirmed the Xinhua statement and said it was still awaiting final approval from China's central government regarding the incorporation of the related joint venture companies and the completion of regulatory procedures.

The deal brings Disneyâs long-planned park in mainland China closer to realisation, a Disney spokesperson explaining "for quite some time, we have been involved in discussions with the Shanghai government about building a Disney theme park. We can confirm the statement from the Shanghai government that we have taken another step forward in the approval process."

Shanghai's Disneyland is expected to cover around 4 kilometres2 and cost about 25 billion yuan (US$3.75 billion), Xinhua said. Disney itself gave no further details.

Disney received approval to build a Disney theme park in Shanghai a year ago, but discussions about the specifics have been ongoing and few details have been released publicly.

Disney has long sought to build in Shanghai, a booming city of about 20 million people that is ringed by the prosperous Yangtze River Delta, home to tens of millions more potential visitors.

It was less enthusiastic about building near Beijing, which has fewer large population centres in the immediate vicinity.

Disney's foray into the China market has been mixed so far, with its Hong Kong Disneyland park reporting a loss last year.