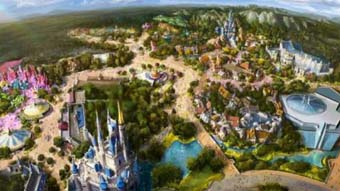 Disney has revealed plans for a ¥500 billion (US$4.5 billion) expansion of it's Japanese theme parks and resorts as part of a 10-year expansion plan.

Starting in March 2015, the project will boost capacity at Tokyo Disneyland and Tokyo DisneySea. The expansion, to be undertaken with local operator Oriental Land Co, will almost double the size of the Fantasyland section and create a new theme port at DisneySea. Developments will include special viewing areas for parades and shows, as well as enhanced restaurants and shops.

While specific new rides have not yet been revealed, reports suggest an attraction based on the Disney’s recent movie hit Frozen, which could consist of the castle featured in the animated film and ways for visitors to experience scenes from the movie.