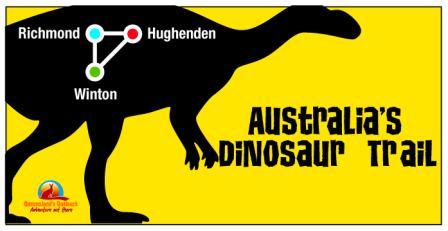 Plans are being developed for Australia's own Jurassic Park, a series of field museums and a Dinosaur Tourist Trail, based on outback Queensland's treasure trove of dinosaur fossils.

The site of inland sea 100 million years ago, the vast floodplains left behind as the waters receded came to accumulate dinosaur bones. Fossil fragments were found in Central Queensland as early as the 1920s, but it is only this decade that momentous discoveries of uniquely Australian species of dinosaur have been made. These concentrated bone beds are now considered equal to any major dinosaur quarry in the world.

As Queensland Museum Paleontologist Scott Hocknull explains "it's a revolution in natural history in Australia ... the last decade has seen an unprecedented number of new dinosaur discoveries in Australia.

"Children no longer need to learn about North American dinosaurs to fuel their appetite for the beasts ... now they only need to look in their own backyard."

To make the dinosaur finds accessible to the public, a Paleo Tourism Trail is being developed, linking excavation sites and museums at Lightning Ridge, Eromanga, Winton, Hughenden and Richmond. Visitors will be able to see the digs in action, help prepare fossils for preservation and view full-size replicas of Australia's own dinosaurs.

Expected to boost tourism in Central Queensland, the trail, which hinges on proper road access being established to certain sites, will be funded in part by a $600,000 grant from the Australian Research Council. It is expected to be completed within three years, and could boost local tourism by as much as 30%.

At Plevna Downs near Eromanga, the Queensland Government has allocated $100,000 to investigate the development of a new dinosaur attraction. Stretching 100,000 hectares, Plevna Downs encompasses 13 dig sites, but is currently closed to the public.

Interest in the area began five years ago when a local sheep grazier's son found a bone which further digging revealed to be a piece of the largest dinosaur to have walked the Australian continent.

Five metres tall and up to 30 metres long, the plant-eating 'Cooper' is a member of the Titanosaurus family and is among the top 10 largest dinosaurs in the world, rivalling a T-Rex. As Scott Hocknull explains, "it's a monstrous beast."

Hocknull also believes that the find indicates there is an even bigger Australian dinosaur to be found, a carnivorous beast which could eat Cooper, explaining that "the bones have to be somewhere out there in the floodplain ... we just have to track them down."

Rather than relocate the dinosaur bones off to city museum, the planned Plevna Downs field museum will prepare, preserve and store the fossils where they were discovered. It is expected to cost up to $2 million and be completed in two years.

As Stuart Mackenzie, Chairman of the Outback Gondwana Foundation, the custodian of the Eromanga fossils says "the overriding response we get from visitors is they want to go to the area of discovery to see the material."

Earlier this year three new species of dinosaurs, nicknamed Banjo, Matilda and Clancy, were discovered in a prehistoric billabong near the central western town of Winton. Named after characters created by poet Banjo Paterson, Banjo (a carnivorous theropod), Matilda and Clancy (giant plant-eating sauropods) were found in a vast geological deposit that dates back 98 million years.