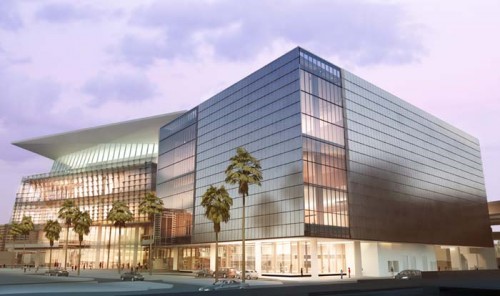 With the Qantas Credit Union Arena set to host its final performances on 19th December, details of how Sydney’s live entertainment scene will be invigorated have been revealed by the management of the International Convention Centre Sydney (ICC Sydney).

Set to open in December 2016, ICC Sydney will be Australia’s premier convention, exhibition and entertainment precinct, offering a “world class entertainment hub” with three new theatres and a bustling array of bars and dining establishments, all located within walking distance to Sydney’s CBD and public transport.

ICC Sydney Chief Executive Geoff Donaghy said the new entertainment offering will be a first of its kind in Australia, stating “when ICC Sydney opens, the city will experience a real paradigm shift in how it enjoys events, with a multitude of dynamic venues opening within an integrated precinct that includes the best in pre and post gig entertaining.

“From concerts with beloved Aussie performers or major international acts, to dance productions, plays, poetry and comedy, ICC Sydney will be a must-visit location for all entertainment lovers.”

At the heart of the ultramodern hub will be the ICC Sydney Theatre, an innovative, tiered and fan-shaped venue which will enrich the live experience for audiences by bringing them closer to performers and providing unobstructed views of the stage. 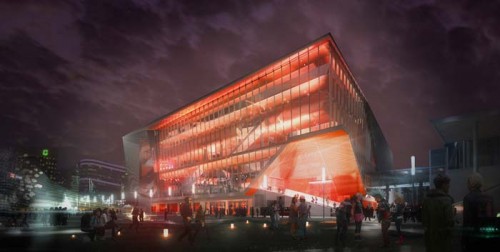 Based upon a capacity of 8,000 seats, it will be possible for the venue to be scaled down to 3,000, and up to a capacity of over 9,000 in general admission standing mode.

Donaghy noted that ICC Sydney will feature a striking contemporary design, unrivalled sound and visual technology and an amazing variety of spaces and places to explore.

He added “along with three impressive theatre venues, ICC Sydney will be home toa 5,000 metre² open air event deck, a 2,400 metre²  multipurpose event space, a 2,000 seat ballroom and seven exhibition halls, all folding into the beautiful Tumbalong Park which will be expanded by 3,000 metre².

“All venues will have world class staging and technical facilities, with sound and visuals brought to life through high definition screens, large scale projection and superior audio equipment.

“By offering the ultimate entertainment experience, we hope to reinforce Sydney’s reputation as one of the most desirable destinations in the world. And with ICC Sydney at its heart, the future of entertainment in Sydney certainly looks bright.”

Destination NSW Chief Executive Sandra Chipchase is looking forward to the ICC Sydney presenting significant opportunities for the world’s leading event organisers and promoters to bring their events to Sydney.

Chipchase commented “ICC Sydney’s world class facilities and integrated approach to the use of public space is truly ground-breaking and shows that NSW is at the global forefront of event and entertainment innovation.” 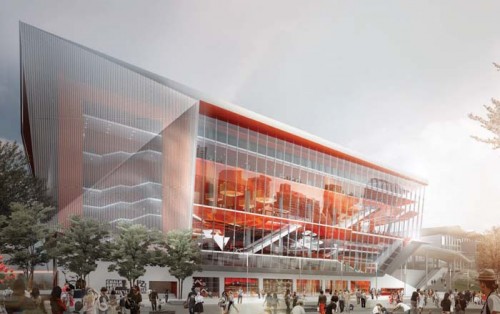 After its final performances, the 13,250 capacity Qantas Credit Union Arena will be demolished, leaving central Sydney without a major entertainment arena for around 12 months.

During that time, major indoor entertainment and sporting events are likely to transfer to the 21,000 capacity Allphones Arena at Sydney Olympic Park.

Opening in December 2016, ICC Sydney is the epicentre of a 20-hectare transformation of Darling Harbour by the NSW Government that aims to position Sydney as the first choice in Australia and the Asia Pacific region for the major events industry.

Images: Artists impressions of the new theatres at ICC Sydney. From top: The 2,500 capacity Darling Harbour Theatre and two views of the ICC Theatre Sydney.