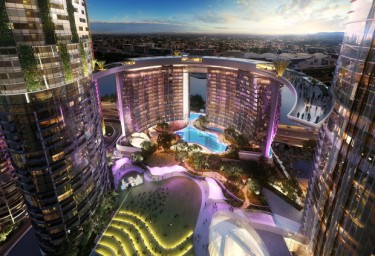 Brisbane’s heritage-listed Treasury Casino is to be transformed into a high-end department store as part of Destination Brisbane's winning bid to redevelop Brisbane's Queens Wharf precinct.

The consortium, made up of Echo Entertainment Group, Far East Consortium and Chow Tai Fook Enterprises, was announced as the bid winner on Monday afternoon by Queensland Premier Annastacia Palaszczuk.

Premier Palaszczuk advised that an independent panel assessed the Echo bid, and the rival proposal by James Packer's Crown Resorts, stating “one of the signature efforts was this large amount of public space that families will be able to enjoy, plus the probity checks, as well as the consortium was able to demonstrate to government that they are ready to proceed. We needed to have that financial security.”

Queensland State Development Minister Dr Anthony Lynham said the project would be "transformational for Brisbane" adding “it'll do what South Bank did for Brisbane 30 years ago.”

The Destination Brisbane/Echo consortium include a feature ‘Arc’ building that will house the new casino, five new premium hotels, 50 restaurants and bars, a new lyric theatre at the Queensland Performing Arts Centre, a riverfront cinema, dozens of unique attractions, including a water and light show and major areas of public event space – equivalent to the size of 12 football fields. 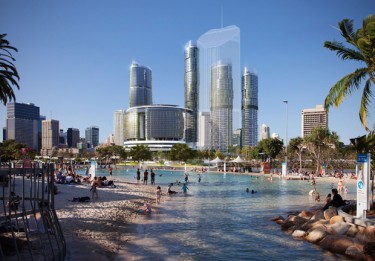 Echo Entertainment Chief Executive Matt Bekier said the consortium's Queen's Wharf would "be an asset for this state that will compete with anything around the world".

Bekier stated “a development of which the people of Brisbane will be immensely proud.”

Work is not expected to start until 2017, after ministerial offices and public servants are moved into the new executive building under construction at 1 William Street.

The redevelopment area is state-owned land, generally located between the Brisbane River and George Street, and between Alice and Queen Streets.

The area contains significant heritage buildings, a number of under-utilised government buildings as well as neglected riverfront land under the Riverside Expressway.

TTF Chief Executive Margy Osmond stated “I am delighted that the Palaszczuk Government has made it a priority to push on with the development of Queen’s Wharf.

“With a preferred proponent now announced, I am sure the project will quickly become an exciting reality for Brisbane, Queensland and the many visitors who will come here to enjoy the great facilities.

“Queen's Wharf will turn an already vibrant city into a truly exciting world-class destination that attracts new visitors and investment to the State.”