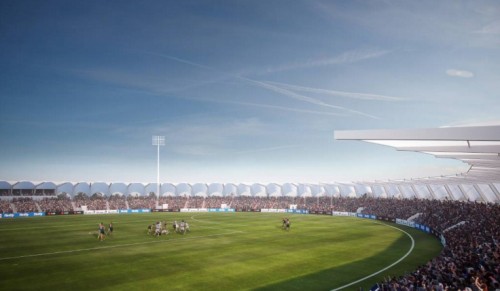 The redevelopment of Ballarat’s Eureka Stadium is on track to see the Western Bulldogs take to the field during the 2017 AFL season, with the Victorian Government releasing designs and key project milestones for the $15 million project.

The draft design for the new grandstand and facilities is almost complete, and interested Ballarat residents and groups can view and comment on the plans at a community information session to be conducted in early December.

The design will then be finalised and submitted to Victorian Minister for Planning Richard Wynne, for approval, with a view to starting construction in 2016.

Melbourne firm Peddle Thorp Architects have been appointed as the lead architect to deliver the project while work has already begun on realigning the oval’s orientation by 32 degrees to meet the requirements of the AFL and Western Bulldogs.

Other components of the project include:

• Replacing and improving the playing surface
• Installing watering and drainage systems
• Reducing the oval size to be the same as Etihad Stadium, and making more room for proposed grandstands and match-day facilities
• Upgrading change rooms and match-day facilities to AFL standard
• Upgrading stadium seating, providing public shelters, toilets for all-abilities access, catering and food beverage facilities and ticketing infrastructure
• Improving lighting around the main oval and providing a video and electronic scoreboard.
• The revitalised stadium will deliver over 5,000 undercover seats, and a total stadium capacity of over 11,000 spectators. 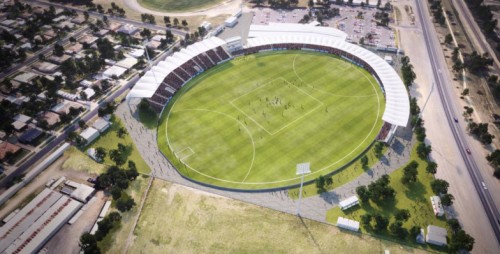 Western Bulldogs Chief Executive Peter Gordon revealed negotiations with the AFL were now complete with games to be scheduled for Ballarat during the 2017 season assuming construction is complete.

In September, the Bulldogs announced a five year partnership with the Victorian Government in which the club will play AFL games and deliver community programs to Ballarat and Western Victoria.

Commenting on the development, Gordon stated “it is a win-win situation, everyone is a winner.

“It is great to bring AFL football to the people of Ballarat, it is great to grow our club into this region, it is great for tourism, it is providing jobs, there are so many good elements to this.”

“It can be frustrating for everybody when something is promised and it takes a little while before you are seeing earth being moved or construction happening. But this was well advanced, this is something the local community have a had a long time interest in.”

City of Ballarat Mayor Des Hudson stressed that the project was a certainty to be completed by 2017, stating “it opens an opportunity for those people who are coming for the AFL football to stay over and enjoy a regional experience rather than just going to and from the game.

“We would encourage them to come and support their teams but also spend a couple of days and embrace everything Ballarat has to offer.”