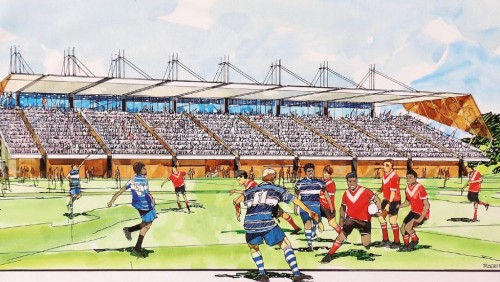 The Northern Territory Government has released designs for its planned $25 million upgrade of Darwin’s Warren Park rugby league stadium that will include three full sized fields, a 1500-capacity grandstand and 630 car parks.

Released for community consultation, with the community; rugby league players, fans and volunteers; members of the public and sporting organisations invited to have their say on the proposed design of the new stadium.

Releasing the design, Northern Territory Minister for Tourism and Culture Lauren Moss stated “the new rugby league stadium at Marrara will deliver a significant windfall for the sport.

“Territorians love their sport and their rugby league, now the NT will have a new first class home to play and watch rugby league. I encourage all community members to have their say on the design.”

The concept design for the stadium was developed in close consultation with a steering committee which includes representatives from NRLNT, NRL, NT Rugby Union and the South Darwin Sporting League (SDSL).

Two fields will be used by rugby league, with one of national standard.

The third field will be alloacted by the South Darwin Rugby Union, but will also be used by NRL NT.

Approximately 1,780 temporary seats will be placed opposite the grandstand on the main field and will have the capacity to be moved to TIO Stadium to provide extra seating for future NRL matches.

Greenberg explained “this upgrade is a significant legacy for rugby league in Darwin and surrounding regions and reaffirms the partnership and growth potential of our game that the Government and the NRL share.

“I was fortunate to visit Darwin last year to meet with some of the locals and hear first-hand their passion and commitment for the game of rugby league.

“I have no doubt that Warren Park will be well utilised for many years to come and I look forward to viewing the new facilities when they are completed.”

NRLNT Chair Belinda Howie said the construction of the new stadium at Warren Park means the sport is another step closer to delivering a contemporary home of rugby league at the Territories premier sporting hub - Marrara.

Howie stated “the release of the concept plans to the public is consistent with NTG process for other sporting infrastructure projects. The process has been well-managed through engagement of a variety of stakeholders.

“The plans detail a sustainable, state of the art facility that meets the needs of users of today and the future. The new facility will enable our current and future players to develop and showcase rugby league skills on a first class facility at Marrara, shoulder to shoulder with other major sporting facilities.

Construction on the project, a partnership between NRLNT, NTG and SDSL, is set to begin in November.

New change rooms, as well as fresh corporate and food facilities are included in the plans.

Members of the public can view the proposed designs of the stadium and provide feedback before 1st July 2017 at https://haveyoursay.nt.gov.au/warren-park