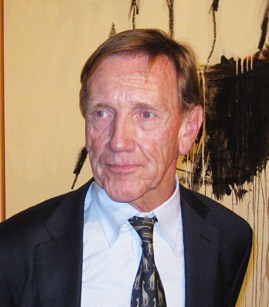 Edmund Capon, who was Director of the Art Gallery of NSW for 33 years, has died in England at the age of 78.

He had been known to have been suffered from melanoma and was reported in December to be gravely ill in London.

Since retiring from as Director of the Art Gallery of NSW, he had moved between Australia and England spending his time writing, guest curating and travelling.

The Art Gallery of NSW’s longest-serving Director, he arrived in Sydney in 1978 from London’s Victoria and Albert Museum, where he was Assistant Keeper of the Far Eastern section.

Born in London in 1940, he obtained a Master of Philosophy in Chinese art and archaeology from the School of Oriental and African Studies, London University, and studied 20th-century painting at the Courtauld Institute of Art. His museum career, and abiding interest in Asian art and culture, was formalised during his time at the Victoria and Albert Museum from 1966 to 1978, working first in the Textile Department and then in the Far Eastern Section.

In 1978, Edmund was appointed Director of the Art Gallery of New South Wales for a three year term. The first internationally-trained art historian and curator to lead the organisation, he retired in 2011.

A Mandarin-speaker, he was an expert in Chinese art and a lively and gregarious public figure, known for his fondness for giraffes and odd socks.

Commenting on his death, Federal Minister for the Arts Mitch Fifield stated “I am greatly saddened to hear of the passing of Mr Edmund Capon AM OBE, and extend my sincerest condolences to his family, friends and colleagues.

“Edmund’s contribution to the visual arts, and to museum practice in Australia, is inestimable.”

“His knowledge, passion and commitment turned the Art Gallery of NSW into an internationally renowned showcase for art. Within his first decade he had more than doubled the Gallery’s annual attendance and his ground breaking 1983 blockbuster, The Entombed Warriors, saw a record 800,000 visitors.”