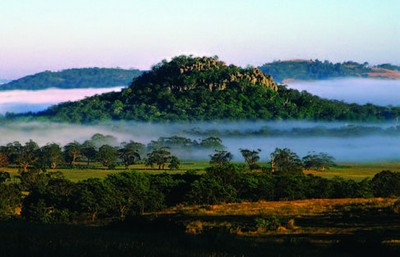 The Victorian Government has intervened in a dispute about development at the iconic Hanging Rock, striking a deal with the Macedon Ranges Shire for it to abandon plans to build visitor and accommodation facilities near the site.

Victoria's Planning Minister Matthew Guy says as part of the deal the Government will contribute $1 million over four years for maintenance at Hanging Rock.

Macedon Ranges Shire Council’s plans to develop a site near Woodend north of Melbourne had faced strong opposition from the local community.

Minister Guy added "we've seen first-hand the interest, the passion and the concern of many, many of the local residents.

"Hanging Rock is a very special place, we all understand that, and so we believed the Government needed to step in and step in very quickly and that's what we have done."

The Hanging Rock Action Group's Luke Spielvogel says the deal is exciting and comes as a relief, stating "I certainly think coming up to Hanging Rock and getting a practical sense of what the proposal meant obviously adds a lot of weight to the issue and can help sort of demonstrate what all the fuss was about."

The Action Group has opposed commercial development plans for a hotel and conference centre, but has not opposed upgraded facilities for ongoing concerts at the site.

Promoter Michael Gudinski has attracted a number of major acts to the site in recent years including Bruce Springsteen and Leonard Cohen.