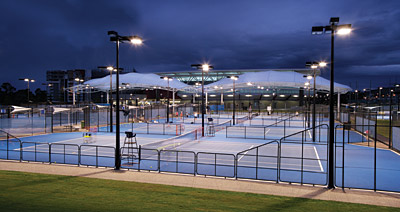 Tennis Australia has announced that the Pat Rafter Arena at the Queensland Tennis Centre in Brisbane would host the Davis Cup by BNP Paribas Asia Oceania Zonal second round tie against Korea from 6th to 8th April 2012.

Australian Davis Cup captain, Pat Rafter, is looking forward to leading his team on hard court at the stadium named in his honour.

Rafter stated "we are all looking forward to heading to Brisbane for the Davis Cup tie against Korea.

"The weather and the court are ideal for the boys and the conditions will definitely boost our chances of winning.

"Both Bernard (Tomic) and Matt (Ebden) have had some excellent wins at the Brisbane International so it's a huge positive for them to return to a place where they've already achieved great results.

"I know the Queensland fans will want to come out and support us, always a huge bonus at Davis Cup, and we look forward to doing them proud."

Tennis Australia's Major Events Director, Steve Ayles, is delighted Davis Cup tennis action is heading back to Brisbane, adding "the world class Pat Rafter Arena, convenient international access and all the amenities the city has to offer make Brisbane the perfect choice to host the tie against Korea in April."

Brisbane dwellers have been enjoying their tennis in recent months with Events Queensland anouncing that January's Brisbane International drew record attendance figures of 92,802 - smashing the previous 2010 record of 82,257.

19th May 2011 - BRISBANE IN THE WORLD TENNIS SPOTLIGHT