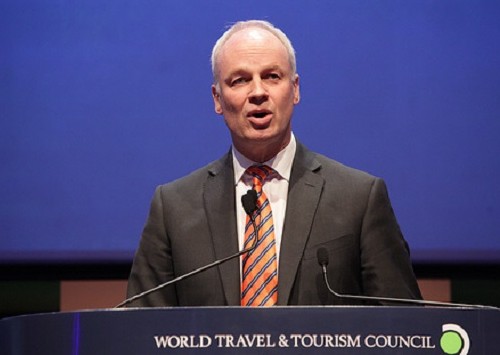 The World Travel & Tourism Council (WTTC) has announces the departure of David Scowsill, its President and Chief Executive over the past six years.

During his tenure as the third President in the 26 year history of WTTC, Scowsill has taken the organisation to new heights, championing the private sector views in high level governmental discussions and promoting the sustainable growth of the international tourism industry.

Commenting on his departure, Scowsill stated “it has been a privilege to lead WTTC, representing the global interests of the private sector of travel and tourism, through advocacy with governments around the world.

“The membership of the organisation has doubled in the last period, but more significant has been the work with governments at all levels on the key strategic issues for the sector.

“By making this announcement now, the Executive Committee has time to identify a successor and to work through a smooth transition in leadership. Working with a very talented team, we have consolidated the position of WTTC as the authority in the sector, whether through research, advocacy, or the impact of the Global Summits. I now look forward to focussing on new opportunities, knowing that I am leaving WTTC in great shape.”

President and Chief Executive of WTTC since October 2010, Scowsill’s time at the helm of the Council have seen a range of highlights including a public/private partnership with UNWTO that has produced 84 meetings with Presidents and Prime Ministers, where messages about the importance of the sector have been directed to these key leaders.

As founder and Chairman of The Global Travel Association Coalition, he ensured that the tourism industry spoke to governments with One Voice on the key issues – from travel facilitation and terrorism, to infrastructure development and environmental sustainability.

Prior to WTTC, Scowsill served as Chairman or Director with various companies, working for six years in Private Equity and Venture Capital to execute a number of deals across the industry. He was Chief Executive of Opodo and the Minit Group, after holding executive and board positions at Hilton Hotels, American Airlines and British Airways.

Commenting on the departure, WTTC Chairman Gerald Lawless stated “the Executive Committee thanks David for his service and is very appreciative of the many contributions he has made to the mission, growth and success of the sector over the past six years.

“Under his leadership and vision, WTTC is clearly positioned as the private sector authority on travel and tourism, reflected in the calibre and geographic diversity of the membership group.

“During this transition period it will be business as usual, as the Executive Committee works to identify a successor.”

Scowsill will leave the WTTC in June.