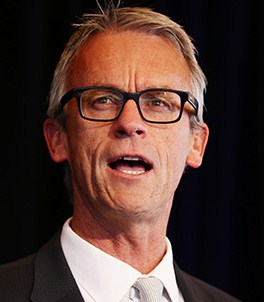 The Board of Football Federation Australia (FFA) has announced that the contract of Chief Executive David Gallop has been extended until the end of 2018.

The decision was taken at the FFA Board’s most recent meeting on 29th January.

Gallop joined FFA in November 2012 on a four-year contract after a decade as the Chief Executive of the National Rugby League (NRL).

The extension will see Gallop remain in charge until after the 2018 FIFA World Cup in Russia.

FFA Chairman Frank Lowy AC said the Board was unanimous in reaching the decision to extend Gallop’s contract.

Lowy stated “David’s tenure since November 2012 has coincided with a period of stability, growth and innovation in Australian football, driven by initiatives that the CEO and his team have managed with great skill and care.

“The major achievements of launching the Westfield FFA Cup, Foxtel A-League All Stars and the National Premier Leagues are highlights, while the growth in the Hyundai A-League gives the game a thriving weekly showcase.

“The contract extension is worthy recognition for David’s hard work and will give all FFA’s stakeholders certainty and confidence for the years ahead.”

Gallop said he was delighted to accept the new mandate to 2018 and relished the chance to implement long-term plans for Australian football, adding “it’s been a privilege to be CEO at a time of such spectacular growth for the game and the incredible achievement of winning the Asian Cup.

“I thank the Board for their vote of confidence. I feel invigorated by the challenge ahead and I will aim to strengthen the unity of purpose among football’s stakeholders.

“The work we’re doing at the moment with our stakeholders on the Whole of Football Plan will set a platform for football to become the biggest and most popular sport in Australia.

“In doing that we’ll always recognise the passion and energy of the 1.96 million Australians who currently participate in the beautiful game.”

Gallop has thanked his Senior Management Team for its support over the past two years.

He added “I arrived with a mandate from the Board to review and where necessary renew the senior management ranks.

“We now have a great mix of skills and experience for the task of running Australia’s fastest growing sport.

“I’m proud to have established a dedicated Community Football department with a strong focus on Women’s football. Our review and overhaul of the National Teams Unit has produced great outcomes.

“It’s an incredibly exciting period for the game and I’m certain our best years are ahead of us.”