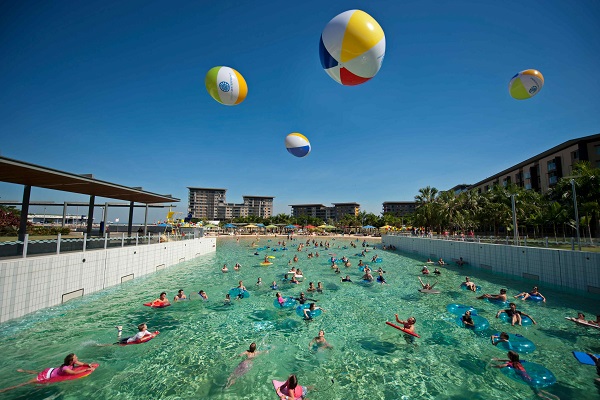 Highlighting an issue that has impacted aquatic facilities across the country over the past decade, the Darwin Waterfront Corporation has today advised that its popular Wave Lagoon is not in operation due to "widespread tile failures".

In a statement advising that waves in the Lagoon are not available, the Corporation advise "tile failures have impacted the Wave Lagoon to varying degrees for the last 10 years".

The statement continues "a number of large aquatic facilities around the country with tiled pools have had similar experiences.

"The Corporation is looking at immediate options to recommence waves at the Lagoon in a safe way while longer-term plans are finalised.

"Longer-term re-lining options are being considered by the Corporation, including alternatives to tiles which can significantly reduce shut-down times.

"The Corporation will also look to make other improvements while the facility is closed; including a new kiosk and amenities building, upgraded wave generators and improvements to the kiddies play area.

"Timelines will be known once a re-line product is confirmed and contractor engaged. Dependent on lining product, a shutdown of between two to eight months is expected and all refurbishments are planned to be completed by mid-2020."

The Corporation advised that Wave Lagoon Annual Pass memberships will be placed on hold for the duration of the shut down while apologising for any inconvenience and thanking the public for its patience.

The Wave Lagoon shallows and childrens area remain open and are free to use.

Tiling failures at pools across Australia
Australasian Leisure Management is aware of a significant number of tiling issues within aquatic centres completed over the last decade in Australia.

Most recently, tiling issues at the City of Greater Bendigo’s recently opened Gurri Wanyarra Wellbeing Centre saw patrons sustain cuts to their feet from lose tiles while, in early 2018, the City of Wodonga had to spend close to $500,000 retiling the Olympic swimming pool at its Waves aquatic centre.

The retiling was required on the 50 metre pool, which had been opened in 2013, having experienced tiles dropping off the pool lining since 2016.

Beyond this a number of other commercial pools, particularly in Victoria, are understood to have faced significant ongoing costs relating to their tiling.

Causes have been suggested as being due to issues with adhesive and ‘shrinkage’ of concrete pool linings.

With causes seemingly difficult to identify, Australasian Leisure Management understands a number of confidentially agreements have been entered into between pool owners and those responsible for the construction and supply of materials at these facilities.

However, in many cases it appears the pool owners, mainly local government, have been left with costs reaching hundreds of thousands of dollars.

Australasian Leisure Management will be researching this matter further and following up in future reports.

If you have experiences relevant to this matter to share contact Australasian Leisure Management Publisher, Nigel Benton on nigel@ausleisure.com.au