Darwin to gain a home venue for rugby league 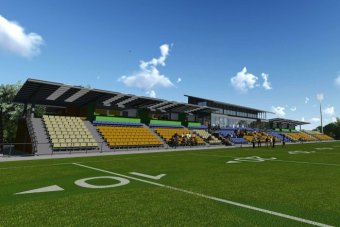 Northern Territory Minister for Tourism and Culture Lauren Moss will bring forward the project by four years with work to start on the stadium in the 2017/18 financial year.

Minister Moss has also announced that an additional $10 million will go towards a new indoor netball stadium at the same complex.

Under the plans the two venues will be built at Warren Park in Marrara, across the road from Marrara Stadium, the longtime home of AFL in Darwin.

Minister Moss said the development would help boost the economy and also provide a "top class facility for our community".

She added “we know that we need to be providing local projects and local jobs for local people, as well as providing fantastic facilities for Territorians.”

However, Minister Moss was not able to give any details on what the expected capacity of the new rugby league stadium would be, or how parking and public transport problems around the Marrara spots precinct would be resolved.

Minister Moss has also announced $100,000 in funding for 17 festivals and events to be held across the Northern Territory next year.

Introducing the funding, Northern Territory Minister for Tourism and Culture Lauren Moss said the funding would help with the interstate and international marketing of each event.

“Our festivals and events are quirky and unique and help build the Northern Territory’s reputation as a fun and adventurous holiday destination rich in art and culture.”