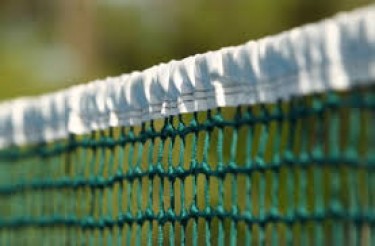 Work on the purpose-built grass tennis courts to host the Davis Cup World Group quarter final tie between Australia and Kazakhstan is underway, with contractors laying turf on the competition court and two practice courts at Darwin’s Marrara Sporting Complex.

Northern Territory Sport and Recreation Minister Gary Higgins and Tennis NT Manager Sam Gibson inspected work on the site earlier this week, with Minister Higgins stating “Marrara will be transformed over the coming months to host one of the world’s biggest sporting events.

“It is very exciting to see the first stage of works beginning to take shape as the grass courts are laid in.

“Building the courts from scratch is a first for the NT Department of Sport and Recreation and a first in Darwin for Tennis Australia, so curators, organisers and contractors will be keeping a keen eye on the turf.

“Over the next couple of weeks rollers will be running over the turf to ensure the grass flourishes on both the competition and practice courts.

“By the time the Davis Cup quarterfinals roll around in July, the grass courts will be at an international standard supported by world class facilities with beautiful tropical Dry Season weather as a backdrop.

“Interstate and international visitors will certainly be getting the best of what the Northern Territory has to offer and I’m sure many will take the opportunity to stay on and experience our unique tourism destinations.” 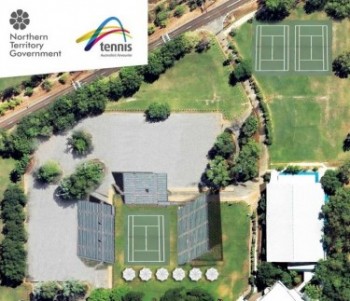 Ground plan courtesy of NT Department of Sport and Recreation.

Manager of NT Tennis Sam Gibson said it is fantastic to see the courts starting to come together, adding “this is just the first step in staging a world-class tennis event like Davis Cup and we’ll be keeping a close eye on the Marrara Sporting Complex during the transformation.”

The surface of Legend Couch grass, grown in North Queensland will cope with five matches in three days and Darwin’s dry season weather.

Commenting on the surface, Gibson stated “in terms of the grass it needs to go in sooner rather than later to make sure it grasps the soil so when the guys are running around at full pelt they’re not ripping it up too easily.”

Remarking on the event’s tight scheduled, Gibson commented “each country will have a practice court for the week or so leading in but the show court itself is just for the three days of the tie.

“The players will come straight from Wimbledon to Darwin and I would imagine that to be seven or 10 days before the Davis Cup.”

Gibson said temporary stands on the show court would not be erected until a few days before the first serve in the singles opener.

He explained “we’re aiming a bit closer to the date, we don’t want to impede what is happening on a day-to-day basis on the site.”

The Northern Territory Government is spending more than $500,000 on a temporary grass court tennis stadium, with 4,500 spectator seats in temporary stands, and two practice courts for the three-day Davis Cup round.

Northern Territory Chief Minister Adam Giles says the hosting is a "worthwhile investment that will reap rewards", adding "this is huge for the Territory and great news for local tennis fans.

"We have worked hard to secure one of the world's most widely watched and highly anticipated sporting events, and I'm confident there will be a huge turnout at Marrara for some first class tennis."

Having beaten Cairns in bidding to host the tie, Minister Higgins concluded “it took a lot of work from the NT Government, Tennis NT and Tennis Australia, but we’ve got there and it’s a fantastic result for the Territory.”

The Davis Cup by BNP Paribas World Group quarterfinal tie between Australia and Kazakhstan will be held from 17th to 19th July at Marrara Sporting Complex.