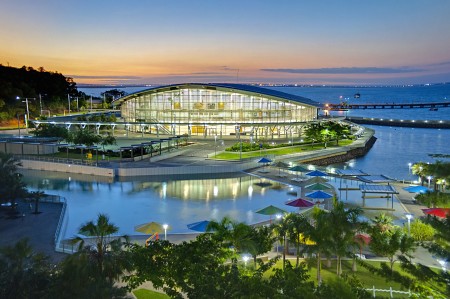 The Darwin Convention Centre has officially opened its doors to the world after a week of celebrations that has seen more than 17,000 Northern Territorians head to the Darwin Waterfront to witness spectacular laser light shows, dancing jet skis, and inspirational fireworks.

Opening the Centre, Northern Territory Chief Minister, Paul Henderson, said the facility is a tribute to those who believe in Darwin's future, stating "the opening of the new jewel in the Territoryâs crown marks a new era in Darwinâs economy, and itâs already delivering beyond expectations."

The Centre, part of $1.1 billion Darwin Waterfront project, has a total floor are of 22,900 metre² for conferences, exhibition facilities for up to 4,000 delegates and a 1,500 seat auditorium.

The new Centre has already captured the attention of global conference organisers with 38 confirmed conventions estimated to attract 20,000 delegates to Darwin through to 2011.

As General Manager, Malu Barrios states "we are delighted with the results to date and look forward to securing more business for the future."