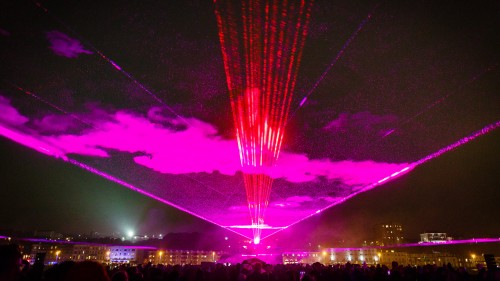 The organisers of Tasmania's Dark Mofo festival have advised that the 2017 edition of the annual mid-winter event has been the biggest yet, with 427,000 attendances recorded, up from 297,000 last year.

The significant jump in attendance represents a 43.7% increase in sales, bringing $2.44 million flooding into the Dark Mofo box office.

This year, controversy reached fever pitch over Austrian artist Hermann Nitsch's installation which saw performers interacting with the carcass of a bull and 500 litres of blood.

A petition signed by more than 21,000 people attempted to stop the show.

Russian punk baned Pussy Riot were also a headline act while 17,000 fears were obliterated with the traditional Indonesian style burning of a sculpture, this time the thylacine Ogoh-ogoh demon.

For lovers of Dark Mofo tradition, 95,000 people passed through the gates of the winter feast and 108,000 passed the famous neon sign at Macquarie Point and into Dark Park.

In a statement, festival Creative Director Leigh Carmichael advised “we have no idea where the festival will go from here.

"But it seems clear that we face some challenges in relation to demand... there are certainly some interesting times ahead."

19,000 people visited the Museum of Old and New Art during the festival.