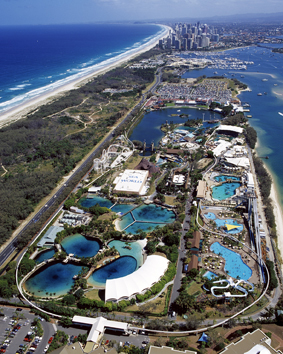 A new independent report has said that plans for a new multi-billion dollar theme park on the Gold Coast, to be developed by Chinese real estate and entertainment giant Dalian Wanda Group, would potentially take away a third of trade from the region’s three major existing theme parks.

Announced last year by Dalian Wanda Group Chairman Wang Jianlin, the new theme park is part of plan for Wanda to surpass Disney as the world’s largest tourism business by 2020.

The report, released by CITI equity researchers, says the new park would bring an extra million visitors to the region each year, but would take 30% of the existing market from Dreamworld, Sea World and Movie World. According to the report, an extra five million visitors would need to visit those parks each year to remain competitive with the new addition.

Dreamworld has already revealed that it will take on competitors, with Chief Executive Craig Davidson telling the Gold Coast Bulletin “we will continue to invest and will not be standing around waiting for it.

“We have our own plans and will be a very different looking place in four years as well.”

Gold Coast Tourism Chief Executive Martin Winter welcomed the report’s findings, stating “anything that will increase visitation to the Gold Coast will be highly welcomed by the tourism industry.

“The spin-offs reach into aviation, accommodation, transport and food and beverage, so everyone could win.

“Whether or not this will impact negatively on existing Gold Coast attractions is something that only time will tell and no doubt you will have differing opinions from different sectors.”

Wanda is currently in negotiation with the Queensland Government to obtain land in Coomera to build the development.