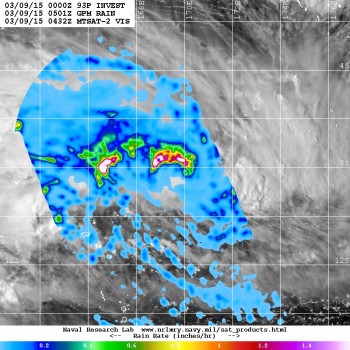 Vanuatu is struggling to restore key infrastructure after Cyclone Pam slammed into the country at the weekend with wind gusts of up to 180 knots (340 kilometres per hour), flattening hundreds of houses and with unconfirmed reports suggesting at least 44 have died.

The Category 5 cyclone, the most severe, has been described as the worst storm to hit the islands in recorded history. It has severely damaged infrastructure with roads and bridges washed away, and a state of emergency and a curfew declared in Port Vila.

Cyclone Pam also closed the airport at Port Vila to commercial aircraft at the weekend, although Air Vanuatu has now resumed commercial flights. However, it may yet be a day or two before contact can be made with outlying islands.

Among aid pledges, cruise operator Carnival Australia has committed $150,000 to the relief effort.

At the same time, Australia’s Department of Foreign Affairs and Trade (DFAT) slapped an immediate “reconsider your need to travel” advisory on Vanuatu.

The aftermath of Cyclone Pam has marooned many tourists in their hotels.

For them and Australian expatriates, the DFAT advice added “Australians in Vanuatu are advised to continue to follow the instructions of local authorities, pay close attention to their personal security at all times and where possible, make contact with relatives and friends in Australia.”

Carnival Australia is working through its charity partner, Save the Children Australia, which already has a team on the ground in Vanuatu and is preparing to send more people and aid.