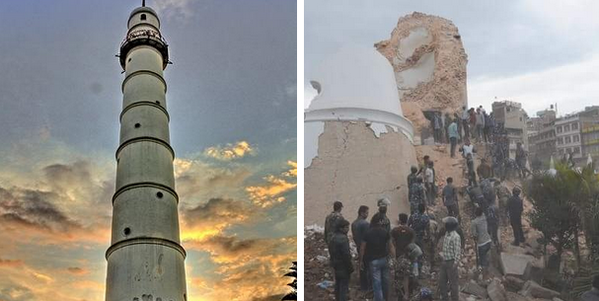 With thousands of lives lost across Nepal during the 7.8 magnitude earthquake on Monday (25th April), hundreds are feared dead following the collapse of several UNESCO World Heritage Sites across the country.

The massive earthquake has taken a massive human and cultural toll on Nepal, with buildings such as Kathmandu’s Dharahara Tower reduced to rubble.

The Tower, a military watchtower first built in the 19th century, has been destroyed in 1833 and 1934 by previous earthquakes and, in its latest  incarnation of the tower, was popular with visiting tourists.

Early reports indicate as many as 200 people were inside the tower when it fell with bodies still being pulled out of the rubble on-site.

Commenting on the catastrophe, Jack Ives, a geographer working in Nepal, told the National Post “that is instant disaster on a large scale and you can’t exaggerate it.

“The damage to that World Heritage architecture is an appalling loss and we can’t measure the impact until we get more details.

“Reconstruction has been very effective (after past earthquakes), but that doesn’t say anything about the appalling loss of life.”

The earthquake has also caused devastation to Kathmandu’s seven World Heritage sites, as well as the Boudhanath Buddhist shrine, which was largely destroyed.

Speaking to reporters, Christian Manhart, UNESCO’s representative to Nepal, explained that the agency was “assessing the situation and collecting information on what the damage is.”

He added that it is currently unclear whether all of the damaged monuments can, or will, be rebuilt.

Images shows Kathmandu’s Dharahara Tower before and after the earthquake.