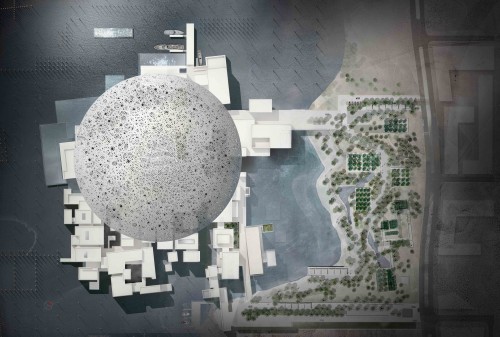 A season of events leading up to the opening later this year of the Louvre Abu Dhabi has commenced with a concert mixing traditional Arab music with a classical Western orchestra.

The ambitious Louvre Abu Dhabi project, announced with much fanfare nearly a decade ago, aims to promote the oil-rich United Arab Emirates as a leader in the global art world.

It has faced repeated delays but the opening of the museum - set to host more than 300 works including from Leonardo da Vinci and Vincent van Gogh - is now set for the end of this year.

Built at a cost of US$560 million, the Louvre Abu Dhabi will feature 9,200 metre² of gallery space.

The outer layer of a giant 180-metre dome on the seaside museum was completed in September.

The landmark structure is perforated with designs that will project light patterns in the shape of palm trees onto the exhibition space below.

The outer canopy is part of eight layers of cladding comprised of 7,850 star-shaped pieces of aluminium and stainless steel, the largest of which measures 13 metres in diameter and weighs 1.3 tonnes. 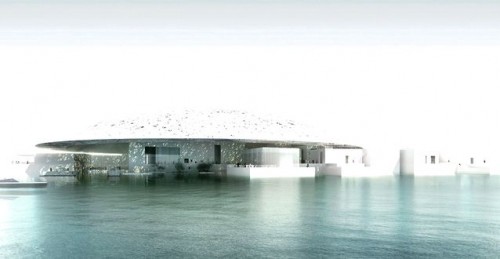 A water system, derived from ancient Arabian engineering, will flow between the enclosed galleries and outer areas of the museum.

Many of France's grand museums, including the Louvre, the Musee d'Orsay and the Palace of Versailles, will loan art to Abu Dhabi as part of a 30-year collaboration with the Emirate worth over US$1 billion.

For the opening, the loans will include artworks by Claude Monet and Henri Matisse, as well as a rare ivory salt cellar from Benin.

Officials have described the Louvre Abu Dhabi - designed by French architect Jean Nouvel - as the largest cultural project in the world since New York's Metropolitan Museum opened in 1870.

It will be the first museum to open at the Saadiyat Cultural District and will be followed by the Zayed National Museum and Guggenheim Abu Dhabi.

Images: Louvre Abu Dhabi from the air (above) and the sea (below).