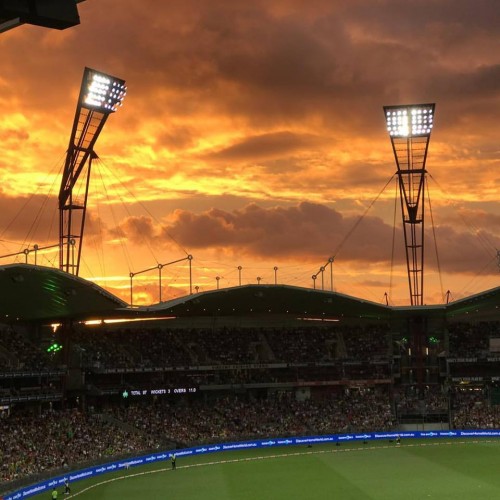 Fans around Australia have been flocking to the KFC Big Bash League this season, with eight sold out matches already in BBL|06 demonstrating the growing popularity of the competition.

Of the 16 matches played so far in BBL|06 eight matches have been sold out, with the Brisbane Heat, Adelaide Strikers, Perth Scorchers, Sydney Thunder, and Hobart Hurricanes all achieving capacity crowds so far this season.

In addition to the sold out matches, an impressive crowd of more than 70,000 watched the first Melbourne derby between the Melbourne Stars and Melbourne Renegades on 1st January at the MCG, marking that the second biggest crowd in the history of the competition, with another big crowd expected for the return derby at Etihad Stadium this weekend.

In addition to the increased attendance, the broadcast viewership to date has seen on average more than one million fans tune in, with women making up 40% of these viewers.

Head of the Big Bash, Anthony Everard said the results to date echoed the hard work everyone from clubs, broadcasters, venues and Cricket Australia had put in to bringing fans another successful season.

Everard explained “we’re seeing some really exciting action on the field and innovative fan entertainment off the field.

“The BBL was a huge hit with families last summer because of the fast-paced on-field action and family friendly atmosphere at every match, and I am sure that BBL|06 will continue to entertain fans for the rest of the season.

“It has been fantastic to see so many kids in attendance at BBL matches again this year, getting involved with the sport and being inspired to pick up bat and ball themselves when community cricket begins again. We are also really pleased with the growing profile of the Rebel WBBL this year and the role this is playing in encouraging girls to take up the game.

“We’re excited about what is to come for the rest of the month, and looking forward to bigger crowds and tighter finishes.

However, the crowded cricket has become a key element of the bitter pay dispute between Cricket Australia and the players with the proliferation of games, particularly T20, posing a danger of burnout for players and fans.

During the current Australia v Pakistan test at the Sydney Cricket Ground, former Australian Prime Minister Bob Hawke stated his concern that three formats and relentless scheduling had diminished his love of the game.

The former ACTU leader stated “I’m less passionate about cricket now than I was.

“There’s too much cricket. I’ve always been in favour of players getting well paid ... but I think money has taken over the game to a large extent.

“I loved the situation where we basically had Test matches and Sheffield Shield matches and that made me pretty happy.