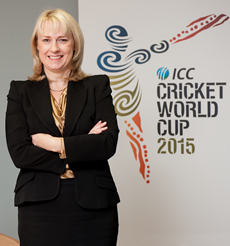 New Zealand’s successful co-hosting of the Cricket World Cup - both on and off the field - has been recognised in the Queen's Birthday honours.

Therese Walsh (pictured), who ran the cup in New Zealand, has been made a Dame Companion of the New Zealand Order of Merit (NZOM), knighted for services to sports administration.

In addition, New Zealand coach Mike Hesson and captain Brendon McCullum have been made Officers of the NZOM, for services to cricket, after guiding New Zealand to their first ever Cricket World Cup final.

As head of New Zealand's 2015 Cricket World Cup campaign she successfully negotiated rights for the number of games shared between New Zealand and Australia, with the opening ceremony to be held in Christchurch.

Walsh also chairs the Ministry of Foreign Affairs and Trade's International Development Advisory and Selection Panel, is a member of the Major Events Investment Panel and sits on the Boards of TVNZ, Westpac Stadium and NZX Ltd. She was awarded the Westpac's Women of Influence Supreme Award in 2013 which recognises women who are having an impact well beyond their formal roles and titles at local, regional and national levels.

Hesson and McCullum's gongs are primarily as a result of the wonderful World Cup campaign, which saw New Zealand go on an unbeaten run and capture the public's imagination, all the way to the final where they were comprehensively beaten by Australia. It was the first time in 40 years New Zealand had made the final.

Also made Officers of the NZOM are basketball coach Keith Mair and netball administrator Raewyn Lovett, for services to their respective sports.

Mair has contributed to basketball as a coach and administrator for 54 years, contributing to school, club, representative, national league and international basketball teams at all levels of the game from 1969 to 2002, including 13 years as head coach of the Tall Blacks, culminating in the 2000 Sydney Olympic Games.

He served 18 years as a board member of Basketball New Zealand and has promoted basketball in the community as a life-long activity for players of all abilities, generally over-40, through weekly games for those ‘going nowhere’.

From 2003 to 2013 he was Chief Executive for England Basketball and is currently the volunteer head coach for Wales.

Lovett was Chair of Netball New Zealand for seven years until 2014, during which time she was instrumental in establishing an innovative framework which has seen the popularity and sponsorship of netball in New Zealand increase exponentially, and was chair of the board of the Trans-Tasman Netball League.

Leading the list of sports people made Members of the NZOM is Kereyn Smith, the chief executive of the New Zealand Olympic Committee and longtime sports administrator, for services to sports governance.